Bank to work with UnionPay, Visa in effort to attract overseas Chinese, US tourists

The Industrial and Commercial Bank of China launched its first credit card in the United States on Tuesday, hoping to target overseas Chinese living and working in America, and to promote tourism between the two countries.

The new card will be offered by two networks, UnionPay and Visa. The purpose of working with Visa is to offer newcomers to the US with limited credit history to be able to get a credit card and "acclimate to the culture of the United States," a statement released Tuesday said.

ICBC will offer two card levels for both network brands, with the "Preferred" ustomers earning 1 percent cash back on their spending and "Premier" customers getting VIP benefits and accelerated cash back.

"This is a milestone for ICBC's international expansion, significant to ICBC's credit card footprint and its rising status globally," said Wang Xiquan, senior executive vicepresident of ICBC. "The issuance of the ICBC credit card in the USA is ICBC's major commitment to boosting China-US economic exchange and to serving local customers." 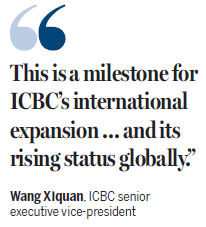 Cai Jianbo, CEO of UnionPay International, said in an interview prior to the launch that Chinese customers who work or live in the US will find the new card useful for its familiarity, as will Americans who travel for business to China and countries near it.

The credit card also was launched as part of cooperation efforts between the China National Tourism Administration office in New York and ICBC for the 2016 China-US Tourism Year.

"We hope that there are more and more exchanges between the two countries, and from UnionPay's perspective, we're hoping to be able to, through our networks, provide more safe and secure payment options to travelers," Cai said.

He said that through its collaboration with ICBC, UnionPay could provide a new payment option for local residents and attract more American tourists to China, supporting the exchange and collaboration between the two countries.

UnionPay is also hoping that it can entice American tourists to use the card when they travel to China, Cai said.

"I think the best proposition [for American customers] is that we can provide the best services to those who are traveling between China and the United States, because so far there's no such product in the market for people in the US that can be used safely and conveniently in the Chinese market," he said.