Chinese President Xi Jinping's state visit to Argentina is "historical" and will definitely advance cooperation between China and Argentina and elevate their bilateral relations to a new level, said Chinese Ambassador to Argentina Yin Hengmin.

This year marks the 42nd anniversary of the establishment of China-Argentina relations and also the 10th year since the two countries established a strategic partnership in 2004. "The leaders will review and summarize the development of bilateral relations in the 10 years and plan a blueprint for the future development," Yin said this month in an interview with China Daily. "They will also sign a series of important cooperation documents and trade agreements."

Yin said the current China-Argentina relationship is at the best stage in the history of the bilateral relations, with more frequent high-level visits and deeper political trust.

Bilateral relations between China and Argentina enjoyed rapid development after former Argentine President Jorge Rafael Videla paid his first visit to China in 1980 and signed a comprehensive agreement involving culture, trade and financial cooperation. Since then, the two governments have maintained frequent visits from their presidents to ministers. About 50 government representatives from China and Argentina have paid official visits to each other's country since the 1990s.

Former Chinese President Yang Shangkun visited Argentina in June 1990, the first state visit by a Chinese president. Five months later, Argentina's then-president Carlos Menemvisited China. The visits further advanced relations between China and Argentina and are viewed as a milestone in the development of bilateral relations.

As of last year, China and Argentina's foreign ministries have held 12 negotiations, and 15 Chinese and Argentine cities and provinces — including the capital cities of Beijing and Buenos Aires — have established relationships.

In 1984, Argentina supported the Joint Declaration that China and the United Kingdom signed giving China sovereignty over Hong Kong in July 1997. At the same time, China also supported Argentina's stand in its disputes with the UK over the Malvinas Islands, 500 miles off the southeast coast of Argentina.

Chinese Foreign Ministry spokesman Hua Chunying said at a press conference on March 11, 2013, that the Malvinas Islands is an issue "left over by the history of colonialism" and China's position on the issue is "consistent". "We will, as always, support Argentina's sovereignty claim over the Malvinas Islands and hope that Argentina and the UK could properly solve this issue through negotiations in accordance with relevant UN resolutions," said Hua.

"The economies of China and Argentina are highly complementary," said Ambassador Yin. "There are a lot of potentials to be discovered in the future. The two countries can have further cooperation in high value-added products especially in the research and development of high-tech industries to optimize bilateral trade structure."

To stimulate economic development, the Argentine government planned to invest more in infrastructure construction. "China can play an important role in this plan," said Hector Marcos Timerman, the Argentine minister of Foreign Relations.

China Gezhouba Group Co Ltd, known for building the country's Three Gorges Dam, announced in 2013 that it will build two hydroelectric dams in Argentina at a cost of $4.7 billion. The project, in which Gezhouba holds a 60 percent interest and Argentina's Electroingenieria SA the rest, will involve designing and building the dams in Patagonia and maintaining them for 15 years.

Timerman said Argentina will build an additional eight large hydroelectric dams in 2014 and the country will be pleased if Chinese companies won the bidding for the projects.

Besides hydroelectric, China also has launched several projects with Argentina in railway construction. Xinhua reported that Argentina signed a $90 million agreemen in 2013 for 81 suburban railway cars to improve passenger safety in Buenos Aires.

Beijing-based China's CNR Corp Ltd also has signed contracts with Argentina, including a $2.2 billion agreement in 2010 for high-speed locomotives and passenger trains. China and Argentina signed a $10 billion agreement that year for Argentina to get electric facilities from China for 10 railway construction projects.

"The Argentine government appreciates China's effort in establishing good relations with developing economies and I hope the two sides can continue to deepen their cooperation in transportation industry," said Timerman. 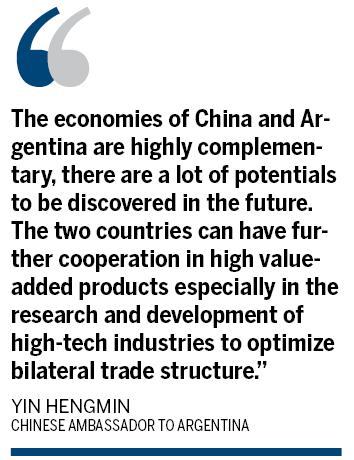 Huwei Technologies Co, a leading Chinese multinational networking and telecommunications equipment and services company with headquarters in Shenzhen, Guangdong, entered Argentina in 2001. It had invested about $120 million in Argentina by 2013. Last year it moved its South American headquarters from Sao Paulo, Brazil, to Buenos Aires, which is expected to bring $20 million of income for Argentina.

The China-Argentina joint committee on trade and economy has held 19 meetings, with the latest one in Buenos Aires last year. Three working groups — economic complementarities, railway transport and infrastructure, and mining — held meetings on cooperation in investment, finance and trade and reached multiple agreements.

China and Argentina also have maintained frequent cultural communications. Local Chinese started to hold their Spring Festival temple fair in 2006, which has attracted participation by thousands of Argentineans.

"Argentina did not pay such attention to China when I worked here 20 years ago," said Yin, China's ambassador to Argentina. "But there are more and more young people willing to learn Chinese and understand Chinese culture. This is a major change in Argentina toward China."

US chipmaker to be deemed monopoly

One dead in shooting in Philadelphia