US President Barack Obama chose the eve of the 13th anniversary of the Sept 11, 2001 terrorist attacks to roll out his strategy against the Islamic State of Iraq and Syria (ISIS).

Obama said the US will lead a broad coalition to roll back this terrorist threat. "Our objective is clear: we will degrade, and ultimately destroy ISIL through a comprehensive and sustained counter-terrorism strategy," Obama said in his address to the nation on Wednesday night.

ISIL, or the Islamic State of Iraq and the Levant, refers to the same organization of ISIS.

Obama said the US will conduct a systematic campaign of airstrikes against the ISIS terrorists and hunt them down wherever they are, including in Syria.

But he assured Americans that the efforts will be different from the wars in Iraq and Afghanistan. "It will not involve American combat troops fighting on foreign soil," Obama said.

The US president has been criticized for recently saying that his administration had no strategy yet for dealing with ISIS in Syria. 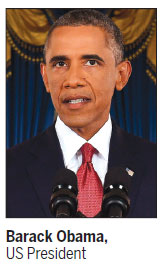 Many war-weary Americans worry that the US might be drawn into prolonged civil wars in Syria and Iraq.

While American public support for fighting ISIS has been rising following the beheading of two American journalists, many Americans also wonder whether ISIS poses a threat to the US homeland.

Some Republicans have challenged Obama for not seeking new authorization from Congress for the expanded action.

Some observers, both inside and outside the US, have questioned whether firepower can actually uproot organizations like ISIS. Some even raised the question whether the US should be blamed for the rise of ISIS, whose members are now armed with US weapons.

At least hundreds of Europeans and some Americans are believed to have joined ISIS in Iraq and Syria.

In Beijing on Wednesday, Chinese Foreign Ministry spokeswoman Hua Chunying did not specify whether China will join the US in fighting ISIS.

She said the Chinese government staunchly fights against any form of terrorism and China is facing realistic and direct threat from the East Turkestan Islamic Movement (ETIM).

"The international community should increase cooperation on the basis of mutual respect and equality, effectively combat terrorism and safeguard security and stability of world and the region," Hua told the daily briefing.

She said the Chinese side had noted the recent report about Chinese citizens joining ISIS. "We are verifying and will follow up on this," she said.

Douglas Paal, vice-president for studies at the Carnegie Endowment for International Peace, a Washington-based think tank, said the US has been cooperative with China on counter-terrorism, but there are differences of opinions of whether certain organizations constitute terrorism.

Paal noted that the US State Department has in the past year shown sympathy and understanding for various terrorism incidents that have happened in China.

"Whether we can find pragmatic ways of cooperation is still a challenge," he said.

Stapleton Roy, former US ambassador to China, believes the two countries will cooperate on counterterrorism. "China and the United States both have a concern about terrorism and wish to oppose it," he said. 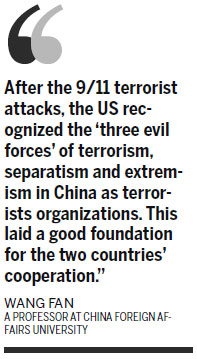 Now a distinguished scholar at the Kissinger Institute on China and the United States at the Wilson Center, Roy said although the two countries' interests in the Middle East are not identical, China has no interest in seeing radical terrorist organizations gaining foothold anywhere in the world.

"Because they recognized that to deal with its own domestic terrorist problem, which China has already seen much evidence on in the terrorism in Yunnan and in Xinjiang and other parts of China, you need to have a consistent policy of opposing terrorism," Roy said.

He believes China and the US have to look for areas where their interests overlap, and then try to develop these areas for cooperation. "If you don't do that, then the underlined strategic rivalry factor will take control of the relationship," he said. "And that's going to be as bad for China as for the United States."

Wang Fan, a professor at China Foreign Affairs University, said China and the US have considerable scope for cooperation with each other in counterterrorism.

"After the 9/11 terrorist attacks, the US recognized the 'three evil forces' of terrorism, separatism and extremism in China as terrorists organizations. This laid a good foundation for the two countries' cooperation," Wang said.

Wang said the military exercises jointly held by the two countries in recent years are related to anti-terrorists, but the two countries should reach more agreements with each other to broaden the cooperation, citing the example of sharing information given the huge US capacity in intelligence gathering.

Li Wei, director of the Anti-terrorism Research Center at the China Institutes of Contemporary International Relations, said as permanent members of the United Nations Security Council, China and US both have the responsibility and obligation to crack down on terrorist activities.