More than 120 heads of state and government, who will be in New York next week for the United Nations General Assembly, are to attend the summit on Tuesday. It is being held to inject new action to address climate change ahead of a conference in Paris next year. The summit will be hosted by UN Secretary General Ban Ki-moon.

"[Whether] your country is developed or developing, you need to find a way to move forward in a low carbon manner," said Zhou, who is with the National Center for Climate Change Strategy and International Cooperation, a climate-change think tank under the Chinese government's National Development and Reform Commission.

"I believe developed countries, they have their business to [conduct] with low carbon, and meanwhile, developing countries also need to explore [its] way for low-carbon development, although they have different context, different priorities," Zou said on a media call hosted by think tank World Resources Institute on Thursday.

China is going to be a focus of the climate summit, not only in addressing climate for the good of the global public, Zou said, but also because the country has to prepare itself as it undergoes the largest human migration in history with its new urbanization plans, laid out earlier this year.

"We are faced with big challenges with both climate and development with a large group of low-income population in China effectively leaving the rural area. For them, they need access to infrastructure, like safe drinking water and urbanization," he said. 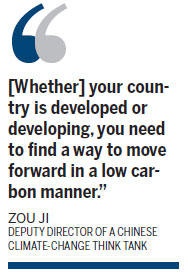 "We believe the only way out to address the dilemma of the trade-off [between] development and climate is the innovation of the development path. We are working very hard to explore these innovations - not only [in] technology, but also in developmental model and developmental pathways at international, national, regional, sub-national level, by making economic growth rate be derived from improving factory efficiency, rather than only increasing inputs of factors such as energy, fresh water, and land," said Zou.

In the context of China's urbanization policy, the country has to consider the multitudes of problems that will come with millions of people leaving rural lands, Zou said, and focusing on how to effectively build cities that will accommodate the people without leaving a large carbon trail.

Zou said that China's path to urbanization needs to be considered from a new infrastructure model, one that is different than used in the West, since the world's second-largest economy has a very different set of issues to overcome.

"I would emphasize a new infrastructure construction. We face the risk of being locked into the conventional model of infrastructure in Europe or even in the United States. We need to find some new ways for our infrastructure to support urbanization," he said.

Zou was joined by Manuel Pulgar-Vidal, environment minister of Peru, and Tony de Brum, minister of foreign affairs of the Marshall Islands, to discuss their thoughts on climate policy and next week's summit.

"I think that's the outcome we want to see from here. We want to see a clear commitment to assist, to recognize that the problem is immediate," said de Brum, "and that difficulties encountered in the past in marrying up resources with need must be addressed fully before Paris even, in order to make sure that the countries are capable of administering programs for both mitigation and adaptation."

Pulgar-Vidal said that people should recognize that the summit will not bring about formal output or a formal outcome, but that it can hopefully "create or capitalize" action.