US Congresswoman Grace Meng is now pushing the House of Representatives to pass legislation to officially recognize Lunar New Year.

"Lunar New Year is celebrated by millions of Asian-Americans and by many non-Asian-Americans throughout the United States, and the popularity of the holiday continues to grow," Meng, a Democrat representing the New York City borough of Queens, said in a statement. "With the holiday observed by so many people, the time has come for Congress to officially recognize it. It simply makes sense."

A resolution sponsored by Meng and co-sponsored by 17 Democrats has been referred to the House Committee on Oversight and Government Reform, the panel with jurisdiction over the issue.

The bill calls for "recognizing the cultural and historical significance of Lunar New Year" and urged the House to express "deepest respect" for the most important festival of Asian communities. It also included the history and celebrations of the Lunar New Year.

The Senate version of the legislation was approved unanimously on Feb 18. The Congress will vote on Meng's bill on a non-determined date.

Earlier this year, New York Governor Andrew Cuomo signed a bill that requires New York City's Education Department to consider closing individual public schools or districtwide if "a religious or cultural day of observance" may cause "a considerable proportion" of students to be absent. 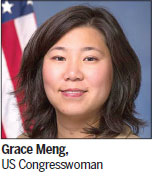 The bill, which Meng was supporting, allows students in Asian communities to celebrate Lunar New Year without missing classes.

"This celebration is a perfect reminder of the many cultures and faiths that make us who we are as Americans," said US President Barack Obama in his Lunar New Year speech on Feb 18. "We are a nation of immigrants. Our vast array of traditions and perspectives and backgrounds - our melting pot - is what makes America unique."

Asian Americans are the fastest-growing ethnic minority in the United States. The US Census Bureau estimates there were 19.4 million Asian Americans as of July 1, 2013. The celebration of Lunar New Year, which falls from late January to mid-February, can last as long as two weeks.

Yuan on move, but not to top