US is lacking 'integrity' in S. China Sea

China criticized the United States for a lack of "integrity and transparency" as the Pentagon chief visited a US aircraft carrier in the South China Sea.

"China stands against any move that pushes militarization of the South China Sea or challenges and threatens other nations' sovereignty and security interests in the name of freedom of navigation," Foreign Ministry spokeswoman Hua Chunying said at a news conference on Thursday.

Both men, along with China's Defense Minister Chang Wanquan, participated in a meeting on Wednesday of Southeast Asian defense ministers and their counterparts from across the Asia-Pacific in Kuala Lumpur.

The meeting failed to generate any consensus mainly due to disagreements on the South China Sea issue. 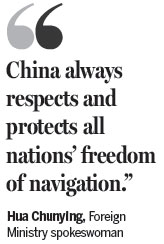 "In that regard, China hopes the US will show more integrity and transparency in their relevant acts and intentions," Hua said.

Fan Jishe, a US studies researcher at the Chinese Academy of Social Sciences, said Carter's move will send out the "wrong signal" not only to China, but also to US allies in the region, which will complicate the situation and leave less space for a diplomatic way out.

"The fact is the US never faced any trouble having their merchant ships pass through the waters. The navigation is free," Fan said. "But they just keep pushing for military use."

Carter's visit comes amid tensions that escalated when the US sent guided-missile destroyer Lassen into waters close to the Zhubi Reef of China's Nansha Islands in the South China Sea on Oct 27.

The US Navy plans to conduct patrols in offshore waters of islands and reefs of the Nansha Islands in the South China Sea about twice a quarter, but Carter would not be on any warship carrying out such patrols, Reuters reported.

Zhang Junshe, a senior researcher at the PLA Naval Military Studies Research Institute, said the US is seeking something more than the so-called freedom of navigation.

"Stirring up the South China Sea with all these pushes for navigational freedom, for what?" Zhang said. "The US owes the international community an answer."