South Korea's Asiana Airlines admitted on Tuesday that their pilot failedto monitor and maintain a safe airspeedin the moments before the crash of Asiana Flight 214 in San Francisco last July, which resulted in the deaths of three Chinese teenagers.

Lee Hyomin, a spokeswoman for Asiana, was quoted by CNN on Tuesday saying that the pilot was not only responsible for the crash but "could have failed to respond quickly" to problems like the aircraft's auto throttle system.

However, US lawyers told China Daily on Tuesday what is significant about the Asiana report released on Monday is that it is "trying to spread liability to Boeing".

"They blame Boeing finding that inconsistencies and logic flaws in the Boeing 777 automation systems," said Brian Alexander, a partner at Kreindler & Kreindler. "They said it contributed to the crash by causing an unexpected disabling of the aircraft's airspeed protection and failing to provide an adequatelow airspeed warning until it was too late."

Kreindler has been retained by families of students who lost their lives and US and foreign passengers who were injured in the crash of Asiana Flight 214.

"At the NTSB public hearings in December 2013 and again in the reports filed yesterday, Asiana has admitted that their pilots' failure to monitor and maintain a minimum safe airspeed during the approach was a cause of the accident," he said. "In Boeing's report they too blame the pilots."

Specifically, Asiana determined that the crew believed that the autothrottle was maintaining the set airspeed and were unaware that automation system logic had disabled the aircraft's minimum airspeed protection, he said.

He noted this particular flaw was recognized as a potential "trap" for pilots.In 2010, a test pilot for the Federal Aviation Administration (FAA) said he was caught by surprise by the functioning of the autothrottle and concluded that "the safety issue was that the autothrottle system did not function the way he had expected or assumed it would operate". 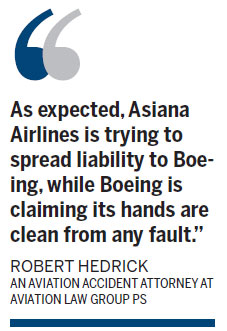 The FAA recommended that Boeing address the autothrottle software issue. Despite being made aware of these automation flaws, Boeing did not address the problem or fix it in the Boeing 777, he said.

"The information provided by Asiana is consistent with our analysis of the causes of the crash and demonstrates that it is a combination of factors involving both the negligence of the crew and the defective design of the aircraft automation systems combined with inadequate warnings for the flight crew that led to this unfortunate and avoidable tragedy," he added.

"As expected, Asiana Airlines is trying to spread liability to Boeing, while Boeing is claiming its hands are clean from any fault," said Robert Hedrick, an aviation accident attorney at Aviation Law Group PS.

While Asiana acknowledges that its pilots "did not ensure a minimum safe airspeed during the final phase of approach", it claims that the pilots were faced with "inconsistencies in the aircraft's automation logic that lead to the unexpected disabling of airspeed protection without adequate warning to the flight crew", he said.This included the autopilot "surprisingly" turning off the autothrottle.

Asiana also claims that the low airspeed warning system "did not provide adequate time for recovery" at 120 feet above ground level, which was 11 seconds before impact. In other words, the engines did not have sufficient time to power up for a go-around, he said.

"Asiana deserves credit for acknowledging the errors of its pilots, even though obvious. Asiana's claim that the B777 low airspeed warning and protection systems somehow failed and contributed to the accident warrant further investigation by the NTSB," he said.

He also said Boeing's comment that the systems were functioning "as expected" is ambiguous.

Though Boeing acknowledged that an "anomaly" with a sensor in the throttle/autothrottle assembly was found after the accident, it claims there is no evidence that the anomaly existed before the accident, he said.