For many of the students from the Shanghai Foreign Language School, this was their first time visiting the United States, let alone New York City. The students were here as part of a cultural exchange program, acting as student reporters and the interview subject of the day was Peter Koo, New York City Councilman.

The students asked Koo, who was elected in 2009 to represent District 20 in Queens, about his background and how he got into politics, which Koo told China Daily he hoped would inspire them to become politicians.

"I told the kids the good things about America, but also about the not-too-good things," he said. "Pick up the good aspects and when they go back [to Shanghai] they can suggest to the school or to the community that they should do certain things like we do." 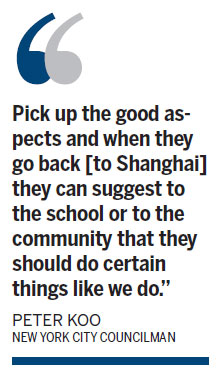 Koo said that he enjoyed the interview and that he's happy to see such young people pursuing their interests. "I told the kids just now that they're China's future," he said.

The group of about 20 students is part of the Junior News Corp of the Shanghai Foreign Language School (SFLS) who contribute to their school magazine, The Crimson Swing.

"Every day, the journalists of the Junior News Corp go to the frontline, and supply the school website with the latest news in and around campus, providing the most up-to-date accounts of the rich and colorful school life to the faculty, parents, and their fellow students," the school said in statement.

Established in 1963, the SFLS is a secondary school located in northeast Shanghai, affiliated with the Shanghai International Studies University, and focuses on foreign language proficiency. The school educates students aged 12 to 18 and is designated as one of Shanghai's elite high schools by the Shanghai Municipal Education Commission.

Xu Xiaogu, a 15-year-old student at the school, asked Koo two questions and said that the councilman's answers gave him a better understanding of how Chinese people live in the US.

"Now I have a better understanding of Peter Koo's responsibilities in office and what motivated him to become a councilman. He was a businessman before and in the past he was only a bystander and could only help out the community minimally, but after he came into office he could help even more people with his power," Xu told China Daily.

Xu said he's never been to New York but it's "even better than what I see on television".

Koo, who immigrated to New York from Hong Kong in 1971, said that he encouraged the students to come to New York and pursue their studies if possible.

"When you see New York, you see the whole world. When you take the subway here, you see 50 different kinds of people here at least," he said. "Residents of New York learn a lot of things about diversity and culture differences."

Koo said he encourages young people to come to America to learn different things. "Now that they're here, they can learn about the democratic political system and how it is, and how even a minority in America can become a politician," he said.