China is set to improve the treatment and welfare of animals in its laboratories, said Yue Bingfei, deputy director of the experimental animal division of the National Institutes for Food and Drug Control.

Yue said that a revised regulation on animal testing was expected to be out within the year.

"An independent section on laboratory-animal welfare and ethics will be added to beef up the regulation," he told China Daily.

About 12 million animals - mostly mice - are used for scientific purposes nationwide each year, according to the Ministry of Science and Technology.

Other animals used include rabbits, guinea pigs, dogs and monkeys.

Groups conducting research on live animals need to have a permit from the authorities, Yue said, but so far "no facilities have been punished for animal welfare and ethics violations".

"The new regulation will clearly define procedures to ensure good animal welfare and ethics and strengthen supervision and regulation over the issue," he said.

In the latest amendment, an ethics review by a special committee of four experts in lab-animal science and one layman is required before starting studies involving animal tests, he said.

The move mainly looks into the necessity for the tests and aims to minimize the number of animals used, Yue said.

Management of the animals, including alleviating pain caused by experiments and post-test care, is also examined, he said. For instance, anesthesia should be used before ending an animal's life after an experiment.

It is possible for practitioners to minimize harm to animals, said Mark Prescott, research management and communications head of the United Kingdom's national center for 3Rs - which refers to replacing and reducing animals in experiments, and refining procedures to make them less harmful.

Yue recognized the 3Rs as a guiding principle for animal welfare and ethics worldwide, including in China.

"In vitro or non-animal methods are first considered. If necessary, use as few animals as possible in an experiment, and use methods that minimize pain or stress," Yue said.

Prescott conceded that despite widespread support, the 3Rs used to be paid "lip service" in many cases, even in the UK.

A commitment from government and scientific leadership to address that problem is needed, he said.

He said that the 3Rs maximize scientific value as well.

But some say that striking a balance between reducing the number of animals used and achieving objectivity in experiments is usually difficult.

"It requires good experiment design and high competence in the practitioners," said Yue.

He said that the concept of the 3Rs came to China in the 1980s, when the use of laboratory animals began to increase.

Scientists increasingly applied the concept in daily work after 2000, but "it still takes time for its full application here", he said.

Members of the international scientific community have criticized China in the past for poor lab animal welfare and substandard ethical reviews, and that "undermined Chinese scientists' international academic exchanges", Yue said.

At the EU-standard animal facility of the Novo Nordisk Research and Development Center China in Beijing, all dogs used in experiments are housed in groups and provided with toys, treats and opportunities to exercise indoors every day.

Dogs also undergo an eight-to 10-month socialization and training process before they are ready for study to ensure minimum stress and discomfort caused by the procedures, according to Jan L. Ottesen, vice-president of the global leader in diabetes care.

"Providing good animal welfare is costly like any other research. When we work with the animals we have to ensure high animal welfare, and that's the way the company decided to go."

Dogs in Chinese-standard labs are usually caged, said Yue, adding that labs in line with EU standards can find it difficult to expand in China because of space needs and various other costs.

Sun Deming, chairman of the Laboratory Animal Science Welfare and Ethics Committee, said that animal welfare and ethics had to be compatible with the country's situation, including laws and regulations, social conventions and other norms.

"Under China's legal framework, humans are superior to animals, and radical approaches in promoting lab animal welfare in some foreign countries couldn't happen here," he said.

"But we share scientific consensus on that, and China has been constantly promoting standardized animal tests and improving animal welfare in the lab."

Yue said that a rising number of animal tests by multinational pharmaceutical companies are being outsourced to China.

Some radical animal rights activists, particularly in the US and the EU, have broken into labs and released the animals used for experiments, he said.

"Because of huge pressure from animal rights groups, more foreign companies have been shifting their animal research into China," he said.

"China would never become a haven for inappropriate animal experiments in the name of science." 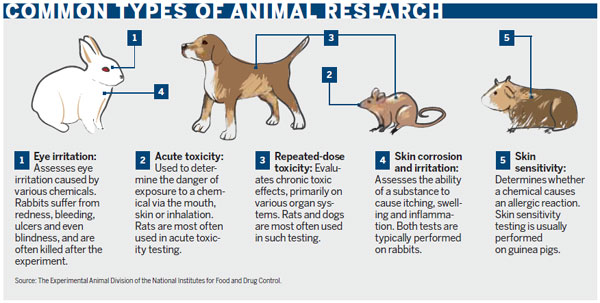