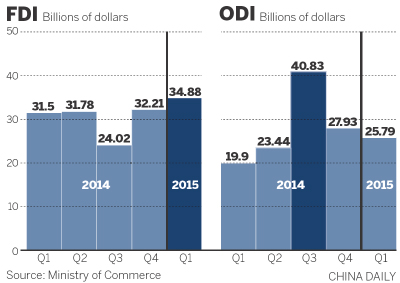 The flow of foreign direct investment from major economies into China remains stable and there is no sign that multinational businesses are withdrawing from the country on any scale, the Ministry of Commerce said on Thursday.

The ministry's comments come after some foreign companies, including Microsoft, Panasonic and Sharp, said they would withdraw or remove part of their business from China to either their home bases or to other developing markets.

FDI to China rose by 11.3 percent year-on-year in the first quarter, reaching $34.88 billion, while outbound direct investment by non-financial companies surged by 29.6 percent to $25.79 billion.

The number of newly registered foreign-funded companies rose by 22.4 percent in the first three months of this year to 5,861.

China's Taiwan and the Hong Kong Special Administrative Region, along with South Korea, Singapore, Japan, the United States, Germany, Britain, France and Saudi Arabia, were the top 10 contributors during this period.

Shen said that even though some multinationals had complained about the changing investment environment in China, they should get used to the new market development model. This is because China is moving up the value chain and optimizing its industrial structure amid the "new normal"－the phrase introduced by President Xi Jinping to describe slower growth, but of better quality.

Many international companies used to invest heavily in China's manufacturing sector, but due to pressure from overcapacity, restructuring, transformation and upgrading, the sector has seen an FDI contraction.

"Chinese and foreign companies are confronted with similar challenges, requiring readjustment and transformation measures to seek new opportunities," Shen said at a news conference in Beijing.

FDI from the US dropped by 40.4 percent to $620 million year-on-year in the first quarter, while investment from Japan fell by 12.3 percent to $1.06 billion.

As a result, overall FDI to manufacturing is falling but rising in the service sector. The US and other nations need to shift FDI to the service industry and also need high-end manufacturing to expand investment in China, Wang said.

Service industry FDI reached $21.59 billion in the first three months, up by 24.1 percent year-on-year and accounting for 61.9 percent of FDI during the first quarter. In the sector, financial, distribution and transportation services attracted the most investment. Manufacturing FDI fell by 3.6 percent year-on-year to $11.22 billion during the period, accounting for 32.2 percent of FDI.

Lin Guijun, vice-president of the University of International Business and Economics in Beijing, said FDI will remain a crucial engine in supporting the economy.

US and Cuba to hold another round of talks

US would consider military force to defend Gulf nations: Obama