US officials, while actively lobbying for the Trans-Pacific Partnership (TPP), are pinning their hopes that a Bilateral Investment Treaty (BIT) with China will provide great opportunities for American businesses.

Charles Rivkin, assistant secretary of state for the Bureau of Economic and Business affairs, told lawmakers on Thursday that the BIT negotiations offer great potential to unlock new opportunities for US firms and promote a more level playing field for US investors in China's markets.

"A high-quality BIT would provide strong investor protections for US investors that support transparency, predictability and the rule of law," he said during testimony before the House Foreign Affairs Committee.

Rivkin, in his current job about a year, said that the US will continue to press China to provide a narrow "negative list" that reflects a high level of openness to foreign investment.

Sean Miner, the China program manager and research associate at the Peterson Institute for International Economics, described the expectation to see the conclusion of BIT before the end of the Obama administration as "ambitious".

"China is about to release its negative list and (it) was still around 120 items long," Miner said on Thursday. "So the expectation from the US trade ambassador is that they want to see a very short negative list, and that's the only way he can take the BIT to the Senate for vote."

During US President Barack Obama's visit to China last November, the two countries committed to pursuing BIT negotiations as a top priority in their economic relations.

Chinese Premier Li Keqiang told visiting US Secretary of Commerce Penny Pritzker last month that he hopes the two sides could reach an agreement soon to take bilateral trade and investment to a new level.

Zhu Guangyao, China's vice-finance minister, said last month that both sides expect the BIT negotiations to yield major progress before Chinese President Xi Jinping's visit to the US this fall.

US lawmakers, however, are not particularly enthusiastic about trade deals. On Tuesday, the Senate, with the support of many Democratic senators, blocked the passage of the Trade Promotion Authority (TPA) that would have given the Obama administration leeway to negotiate with another 11 TPP partners.

During Thursday's hearing, lawmakers questioned whether TPP will be a high-standard agreement in areas such as human and labor rights, the environment and intellectual property-rights protection.

Dana Rohrabacher, a GOP congressman from California, challenged both Rivkin and Daniel R. Russel, US assistant secretary of state for East Asian and Pacific affairs, by asking whether the two have read the complete TPP documents that they have been touting to the American people.

TPP has been regarded as one of the most important components of Obama's rebalance-toward-Asia strategy in a bid to reverse the US' declining market share in China in the wake of China's rapid economic growth.

Some experts, such as Joseph Stiglitz, a Nobel laureate in economics, have described TPP as a US scheme to cut China out of the Asia supply chain. 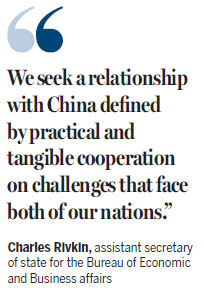 China was suspicious of the TPP years ago, but has since expressed interest, especially when Zhu said in Washington late last year that the TPP is incomplete without China's participation.

China is the largest trading partner of many of the 12 TPP negotiating member nations. Miner said China might lose up to $100 billion in annual trade because other countries in the region would trade more within the TPP than with China.

While calling TPP the top agenda item for the Obama administration in the Asia-Pacific, Russel and Rivkin also emphasized the importance of economic ties with China.

Rivkin said that expanding the areas in which the US and China can work together, while managing clear differences, is central to US engagement with Asia.

"We seek a relationship with China defined by practical and tangible cooperation on challenges that face both of our nations," he said.

During Obama's visit to China last November, the US agreed to expand visa validity for business and leisure visitors from one to 10 years.

The two countries also agreed to expand the WTO's Information Technology Agreement, which will eliminate tariffs on next-generation ICT products such as advanced semiconductors and high-tech medical equipment.

Rivkin described the China-US Strategic and Economic Dialogue in Washington next month as another key opportunity to move mutual economic objectives forward.

Liu Xiaoxian contributed to this story.

US and Cuba to hold another round of talks

US would consider military force to defend Gulf nations: Obama