The capital of the United States is taking steps to attract more Chinese investors, including Dalian Wanda Group, buyer of the AMC cinema chain, the mayor of Washington told China Daily this week.

Mayor Vincent Gray spoke in an interview about his weeklong trade mission to China in June. Among those he met were executives of Dalian Wanda, which operates in real estate, tourism, hotels and entertainment and has expressed interest in projects in the District of Columbia.

"We were very excited to know a firm we met with will actually send a team of people here to look at some of the sites, learn more about those projects and open up discussion on their involvement in Washington," Gray said.

The company, based in Dalian, a city in northeastern China's Liaoning province, acquired US-based AMC Entertainment Holdings for $2.6 billion in May. The deal, which awaits US regulators' approval, creates the world's biggest chain of movie theaters and is one of the boldest direct investments into the US entertainment industry.

Dalian Wanda, which had $16.7 billion in revenue last year, has a sound investment track record and deep pockets. Like other major Chinese companies, it's seeking opportunities abroad. In early June, it announced plans to invest up to $3 billion to develop resorts in Russia.

In Gray's view, Washington would be "a great place to launch their presence in America".

Real estate projects in "the District" that Dalian Wanda might consider investing in, Gray said, include City Market, a large downtown complex combining office, residential and retail space, and a $2 billion riverfront development in the city's southwest.

For Gray, who took office in January 2011, the trip to China was the first international trade mission of his mayoralty. It was also his first time in the home of the world's second-biggest economy.

"What is the best place to go to in terms of opportunities? It's China," he said. 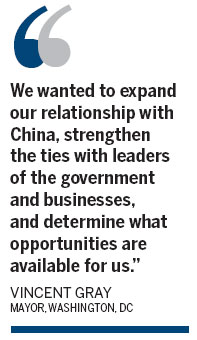 In 2011, the District received about 123,000 visitors from China. But the city has had very few business contacts with China, Gray said.

The mayor's delegation, which included top local officials and 16 business executives and academics, made a whirlwind visit to Beijing, Shanghai and Suzhou, in Jiangsu province, seeking investors in infrastructure, real estate and technology projects.

"We wanted to expand our relationship with China, strengthen the ties with leaders of the government and businesses, and determine what opportunities are available for us," Gray said.

In Shanghai, the mayor followed the lead of many US states by opening the District of Columbia's first trade office abroad.

In Suzhou, a city near Shanghai, DC-based George Washington University has agreed to open a campus.

The trade mission also launched its first project under the federal government's EB-5 visa program, which grants US residency to foreign entrepreneurs who create jobs. Gray said the project involves a $40 million investment from eight Chinese investors for City Market.

Under the EB-5 program, a foreign investor must finance US commercial ventures with either $500,000 or $1 million and create at least 10 full-time jobs. They can set up a new enterprise, invest in a troubled business or put money into a pilot program overseen by the EB-5 program.

China has supplanted the Republic of Korea as the top country of origin for EB-5 visa applicants. In 2011, nearly 3,000 Chinese applied for an EB-5, which was three-quarters of the total, according to US Citizenship and Immigration Services.

Gray pitched the Chinese investors on unique strengths of his city, which despite its relatively small size (only about 600,000 residents) is fueled by political power as the seat of the US government and, not coincidentally, respectable economic growth compared to many parts of the US.

"We grow at 2.7 percent, faster than any state," Gray said of the District. "We are a rapidly growing, dynamic city that people want to live in, and we are doing all the right things this point."

Though he saw only a small fraction of China, the mayor was impressed by how quickly things got done, particularly in relation to the local projects he championed.

"That's the level of speed we should have here. Not only do it, [but] do it now and get it done."

Gray said economic development is a good way to strengthen the US-China relationship. "When people start working together, they will learn from each other and will do good things."