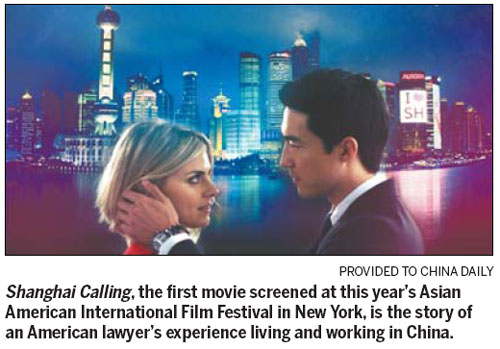 Before the Asian American International Film Festival screened its first feature in 1978 in what is now New York's Chinatown, US audiences had no dedicated showcase for independent Asian or Asian-American cinema. The closest one could get was the occasional martial-arts film at the local movie house.

The 35th edition of the annual festival is a 12-day affair that opened Wednesday and runs through August 5. The US-Chinese production Shanghai Calling, set for release in China later this summer, was the first film screened at this year's festival, which offers 50 narrative and documentary films, including a series of shorts, with writers and directors from the US, China, Japan, Korea, the Philippines and elsewhere.

The festival, which is hosted by Asian CineVision, a nonprofit organization "dedicated to promoting and preserving Asian and Asian-American media expressions," has previously been the venue for premieres of films by celebrated directors Wayne Wang, Ang Lee and Mira Nair.

While the market for Asian cinema continues to expand as the US industry takes note of spending power from the East, Asian leads remain rare in Hollywood. The festival attempts to create opportunities for Asian directors and actors that might not otherwise be there, said Daniel Henney, the leading man in Shanghai Calling.

"It's incredibly important for us as Asians to create platforms to showcase our creativity," he told China Daily. "When I was growing up in Michigan, I couldn't relate to any Asian face I saw on TV or in movies because the ones I saw were either martial artists or spoke with heavy accents. What we're trying to do here is create role models for kids to look up to."

"There is a long history of being not only underrepresented but misrepresented on screen here in the US," said HP Mendoza, the Filipino-American director of I Am A Ghost, which also will debut at the festival.

In 2010, director M Night Shyamalan was criticized for casting Caucasian leads in The Last Airbender, based on comics that featured Asian characters. There is still reluctance in Hollywood to cast Asian faces, said Joyce Yung, a producer on Supercapitalist.

But the rise in the quality of Asian-American film in recent years will likely result in more opportunities, she said.

"It's heading in a positive direction," Yung said. "The idea of West-East and movement between the US and Asia is very topical. People are becoming more and more interested in producing movies on these subjects, and if the films do well then investors will take notice."

"There are a lot of media portrayals of China as being a very threatening or foreboding society and it's not," he said in an interview with China Daily. "We want to show New Yorkers what the other side of the world is like. I love my friends here in New York, but the funny thing is that they believe this city is the center of the universe. But these days, the center of the universe is shifting. The balance of power and wealth and influence is moving toward the East, and it's important that Americans stay well informed."

Shanghai Calling is the story of an ambitious American attorney who heads to China in hopes of making partner, and faces a series of pitfalls typical to the expatriate experience. Touching on similar themes, Supercapitalist also features a driven American as a fish out of water in a foreign land. Both men come to think twice about the rampant materialism of a money-obsessed China.

"Conceptually, my goal was to make a movie about the world turning on its head," Hsia said. "What struck me was that the circumstances of expats living abroad are counter to what we think of as the classic American story. We think of immigrants coming to America to find better jobs and to build better lives for themselves. For the past 10 years or so, many Americans have gone to China and lived as immigrants. It seemed like such a paradigm shift, and a compelling setting for a story."