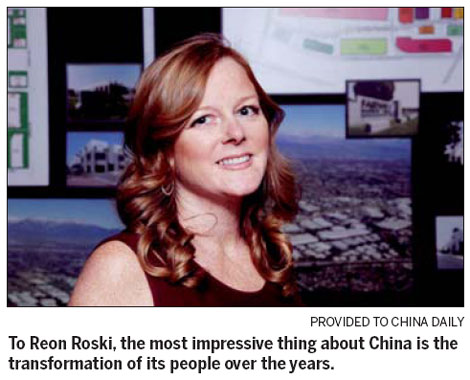 When she was in college in 1983, Reon Roski saw a message touting the first US-China student exchange. She applied and became one of three non-Asians in a 24-person group that visited Guangzhou.

Looking back, the daughter of real estate magnate Edward Roski Jr said his influence caused her to learn about China and its people firsthand rather than from a book.

The elder Roski, who is 601st on Fortune magazine's latest list of world billionaires (No 200th in the US), first visited China in 1975. That was a few years before the country began opening up to the world, and before the founder of Majestic Realty Co sent Reon there to study Mandarin.

Reon Roski first spent two summers in Guangzhou. After graduating from the University of Southern California, she continued her language study at Peking University in 1986 and 1987.

"I still have a lot of good friends from that time," she recalled. They still keep in touch and visit each other.

Following her time at Peking University, Roski became the first local employee hired by China Minmetals Corp as the metals-trading giant was setting up its first US office, in Los Angeles. Her four years at Minmetals was an extensive learning experience, said Roski, who traveled between China and the US frequently and still uses "we" when talking about the company.

With international business experience under her belt, Roski enrolled in law school. Her academic adviser suggested specializing in real estate law to satisfy the student's sociability and negotiating prowess.

"I learned negotiation at Minmetals from how they massage deals," Roski said.

The younger Roski is poised to take over the family business from her father someday. Edward Roski said Reon will "do a much better job" than he does. He praised her as his right hand in identifying real estate projects in China for Majestic's possible investment.

The projects Edward Roski has been seeking are likely on a grand scale, given a track record that includes the 1999 opening of the Staples Center, which is the centerpiece of a newly revitalized downtown Los Angeles. He's also competing with entrepreneur Philip Anschutz for approval to build a stadium that could be home to a National Football League franchise in Southern California, which currently doesn't have one.

China has long been of interest to Edward Roski, who said the country has done "an amazing job in how quickly they achieved their accomplishments".

Reon Roski agrees. To her, the most impressive thing about China is the transformation of its people over the years. Whereas many Chinese used to look similar to her, she now finds they appear more vibrant and individualized.

"It's amazing how quickly the country changed," she said. "China is a majestic country. It keeps coming up in history, like no other culture does. It is a testament to its people."

Reon identifies with the people of the country she admires.

"My triplet boys, who all have red hair as I do, used to tell their teacher, 'My mom's Chinese' when they were young," she said with a laugh.

Reon admits to being a "tiger mother" who pushes her four kids and believes the approach benefits them.

"Chinese families care a lot about children and education," she said. "It's a long-time tradition. Confucius emphasized the importance of teaching the young."

Learning language is important, she has found. Reon learned to speak French and Spanish at a young age, along with English, before going on to study Mandarin. Learning that language helped her understand the "wonderful Chinese culture".

"In Chinese culture, people respect seniors and learn from the older generation," said Reon, whose life exemplifies these qualities. She works with her father from Monday through Friday and takes bike rides with him on the weekends. "My dad is so wise. I hope he'll stay in the company for another 20 years."