A growing number of venture capitalists with roots in China are helping prepare Silicon Valley tech startups to enter the Chinese market with cash infusions and business-incubator services.

These financiers - Chinese-born entrepreneurs who studied or made their fortune in California's technology mecca or were backed by China's government or technology and science parks - are part of renewed VC interest in the region.

China's still-growing economy, the central government's thirst for technology and incentive programs such as the 1,000 Elite Program of subsidies of up to 1 million yuan (about $157,000) each have combined to attract talent and companies across the Pacific.

Venture capitalists with a Chinese background invested in 28 US companies last year, double the number in 2009, according to data from Dow Jones & Co.

In Silicon Valley, Chinese venture capitalists have partnered with US counterparts to compete against established players in the area of tech startup incubation.

As the world's technology and innovation hub, Silicon Valley should have more players in venture capital and incubation, said Roy Kong, a private investor and entrepreneur.

"There should be more players other than Paul Graham and his Y Combinator, Dave McClure and his 500 Startups," Kong said, citing two of the region's most recognizable early-stage tech investors.

"We will use our many resources, networks and connections in both countries to help the startups better perform and navigate the local market," Zhang said. "To summarize, we want to be bridge the gap." 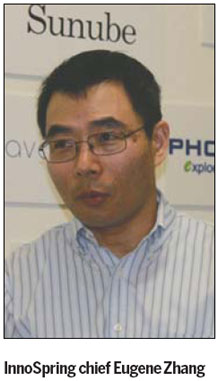 Zhang, who is in his late 40s, is a VC veteran. He studied electronic engineering at Tsinghua University before earning a master's degree at Syracuse University; had leadership positions at Sun Microsystems Inc (now part of Oracle Corp), Cisco Systems Inc and Juniper Networks Inc in the 1990s. Ten years ago, he hatched his own startup, semiconductor company Jeda Technologies Inc and got rich.

"So I have abundant knowledge of not only the whole IT industry, but creating your own startup as an entrepreneur," Zhang said. He recalled having to deal with every step of starting a company from scratch - drafting a business plan, assembling a team, pitching to investors, marketing and selling.

"I wish I'd had an incubator like InnoSpring that I could turn to," Zhang said. "That [startup experience] was exhausting."

So far, 28 companies have become tenants at the 13,500-square-foot office complex, representing an industry mix of Internet, digital media, clean technology and health care information systems. All are small and in very early stages of business development, according to Zhang. Most lack a solid business plan or fine-tuned development strategy, and are staffed by ardent techies.

"The founders usually have brilliant ideas and are excellent developers, but those won't automatically translate into business success and revenue," Zhang explained. "Our services include funding, mentoring, workshops, access to VCs and angel investors, as well as in-house resources like accounting, bookkeeping and paralegal consultation, plus the physical office space."

InnoSpring has invited acclaimed entrepreneurs to speak to its tenants. Guest speakers have included Deng Feng, founder and partner of Northern Light, and Zhou Wei, an investment partner with Kleiner Perkins.