Five years ago, a Google Inc employee asked an academic question of John McCain when the US senator came to the company's Silicon Valley headquarters early in the 2008 presidential campaign season.

"We know that President [George W] Bush was a C student at Yale," the Google worker began. "So do you remember your GPA at school?"

"By today's standards, it would be barely passing," replied McCain, who didn't cite his grade-point average but did admit that he graduated fifth from the bottom of his US Naval Academy class in 1958.

News of his less-than-stellar academic record became a media kerfuffle for a little while. Those at Google, however, also recall the questioner from that day in May 2007.

He is Tom Zhang, a senior human-resources recruiter for the tech giant, then famous solely for its ubiquitous search engine but now purveyor of an array of Web services.

Today, Zhang is still a recruiter - or talent-acquisition expert, as he's known at Tencent America. The company, also located in Silicon Valley, is the US subsidiary of Tencent Holdings Ltd, China's biggest Internet company by market capitalization (about $56 billion).

To an extent, Zhang's query to the Republican presidential candidate reflected skepticism of some companies' view that an Ivy League degree and a high GPA are akin to talent. At Tencent, Zhang said the focus is on "relevant work experience", with a preference toward having a work force from diverse cultural and linguistic backgrounds. Experience with offshore and startup companies are a plus for any job applicant, he said.

The standards reflect the recruitment goals of Tencent America, which has been steadily moving into the US market since it opened shop in California's technology hub in 2007. Its Palo Alto location sits between Facebook Inc's base in Menlo Park and the Googleplex in Mountain View. The three Silicon Valley cities, and the tech giants and startups doing business there, are in fierce competition to attract talent.

Zhang, a Chinese who was born in Inner Mongolia, has been in the United States more than 10 years. He joined Tencent America in 2009 after spending three years with Google. After earning his PhD in electrical engineering from China's Zhejiang University, he became a lecturer in computer science at San Jose State University in California before entering the recruiting field.

Zhang believes he is better-equipped than most tech-industry recruiters to identify qualified candidates.

"My technical background and teaching experience have aided me with 'technical eyes' to spot and select talent more efficiently than by just reading resumes," he said. "After all, you don't see many headhunters with a technical PhD. "

Tens of thousands of Chinese students have come to study on US campuses since the early 1980s. The rapid economic development of recent decades has created tremendous opportunities in China. To meet demand from fast-growing industries, the central government in 2008 launched its 1,000 Talents program to recruit highly skilled professionals from abroad, particularly those born in China who had risen to high ranks of academia in other countries. 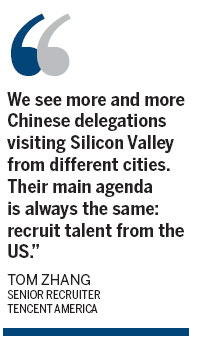 "We see more and more Chinese delegations visiting Silicon Valley from different cities," Zhang said. "Their main agenda is always the same: recruit talent from the US. A few years back, the delegations were from first-tier cities such as Beijing and Shanghai. In recent years, we've seen more [representatives of] third- or fourth-tier cities come. They are confident about their economic achievements and believe their compensation and benefit packages are attractive enough to get talent from the US to settle in their cities."

The US recession and subsequent slow economic growth have given Chinese tech companies an edge in recruiting skilled workers who speak the language and perhaps seek a return to their homeland and apply expertise gained from studying or working abroad.

While establishing itself in the US, Tencent America has quietly but decisively recruited engineers to work for the subsidiary in California or at the parent company's offices in Shenzhen, Beijing and Shanghai. Last year, the company hired 50 people in the United States and transferred some to China.

"This isn't a small number considering that the candidates are all experienced technical experts," Zhang said.

He pointed out that Tencent Holdings' president, Martin Lau, and the head of the company's social-network group, Dowson Tong, are Stanford University graduates. But it was their work experience in the US that made them stand out among the crowd of US-educated Chinese, the executive stressed.

On pace with US titans like Google and Facebook, Tencent has grown to 20,000 employees from just 6,000 in the past three years.

"Many of those we recruit understand that there is more room for career growth and opportunities in China. Joining a Chinese company is more rewarding since (the employees) will be able to participate in China's economic growth," Zhang said. "Of course, other factors are taken into consideration, too: time with family, friends back home and even Chinese food are important factors."

The "glass ceiling" also provides impetus for some US-educated Chinese or Chinese-Americans to take a technology job in China, Zhang said: Although they have been trained in the US and worked there, some for a decade or more, their English isn't as polished as that of native speakers, and some employees feel hemmed in by cultural barriers in the workplace.

Tencent provides a broad range of Internet services in China, the most popular of which is its QQ instant-messaging platform. The online empire combines elements similar to AOL Instant Messenger, Yahoo's signature portal, Twitter and Facebook, and the communication, gaming and social networking functions therein. Each service complements the others on the Web and mobile devices, Zhang said.

The company's growth seems to defy the slowing expansion of the Chinese economy. Strong advertising and user-generated revenue enabled Tencent in mid-August to report a 32 percent increase in net profit for the second quarter, to 3.1 billion yuan ($489.7 million) from 2.35 billion in the same period of 2011.

With 752 million active QQ accounts, according to Zhang, Tencent is one of the biggest platforms of its kind on the Internet.

In its effort to offer more and better opportunities for the Chinese-Americans it recruits, the company offers what Zhang calls "competitive compensation" including bonuses. With so much room still to grow in China, working for Tencent is likely to be a solid, lucrative move, he said.

Co-founder and CEO Ma Huateng, oversaw Tencent Holdings' transition in 2004 to a publicly listed company. (Its shares trade on the Hong Kong Stock Exchange.) He also is determined to gather the best talent.

"We can raise money if we run out of money. We can improve our service if it needs to be improved. But talent is the most precious form of wealth we have," Ma said.