Solar tariffs could harm US firms, too

Three years ago, Bill Keith was hailed as an "energy patriot" in his home state of Indiana for having built a successful company that makes solar-powered ceiling fans.

Fans produced by Keith's SunRise Solar Inc work, in part, by pumping hot air out of an attic, lowering the cost of summertime cooling. The innovation caught the attention of the White House, which invited the roofer-turned-entrepreneur to a town hall meeting in Indiana attended by President Barack Obama just three weeks after his 2009 inauguration.

After that, Keith was summoned to pro-solar events hosted by members of Congress. His story became a talking point for Obama's goal of pushing America toward increased use of renewable energy sources.

Today, Keith is fretting over an administration decision that affects SunRise.

In May, the Commerce Department announced preliminary tariffs of up to 250 percent on imports of Chinese-made photovoltaic solar panels used in electricity generation. The agency said it found that production of the panels was made artificially cheap compared to US-made panels, due to unfair subsidies from China's government, resulting in "dumping" on the US market.

The anti-dumping tariffs followed subsidy-fighting duties the US government slapped on Chinese solar producers in March.

Though directed at China, such trade penalties affect domestic businesses like Keith's. While the solar-powered ceiling fans SunRise makes are assembled in Indiana mostly from American parts, they contain customized solar panels from abroad. Keith said the import duties will "dramatically drive up" his costs.

"The little bunch of panels that I bring in every year that are already expensive for small businesses like mine shouldn't be subjected to tariffs," Keith told China Daily. "The tariffs are about the cells that are inside the panels. My panels don't contain Chinese cells, so technically I shouldn't be dragged into this."

According to the businessman, the solar panels SunRise imports are customized by a Hong Kong company that buys the cells from the United States, Taiwan and Germany. The tariffs ostensibly apply only to solar cells and modules (electrically linked panels and related parts) made in Chinese mainland.

"The US government doesn't believe me," he said. "They are asking me to go to my panel makers to verify that those panels don't have solar cells made in China. My government is calling me a liar.

"Hopefully, when we have our paperwork assembled and submitted, I will be exonerated." 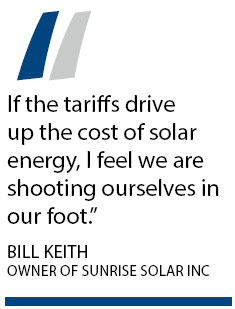 Previously, Keith had difficulty finding a US supplier of high-quality panels. He dealt with a company in New York but said the quality was so bad, it cost him "tens of thousands of dollars to recover the mistakes they made".

"Shouldn't I be free to find the best panel makers that can provide me with the best quality at the most competitive price?" he asked.

While waiting for the final decision on the tariff duties to pan out in October, Keith said he won't be able to order new panels for 2013 without knowing what the rules are.

"If the tariffs drive up the cost of solar energy, I feel we are shooting ourselves in our foot," he said.

The tariffs have sparked debate within the US solar industry. Some companies that install panels and modules as well as project developers say their businesses could be hurt. In addition, US companies that sell China equipment used in producing solar panels and polysilicon for modules oppose the duties out of fear of potential retaliation by Chinese regulators.

A group of US companies formed the Coalition for Affordable Solar Energy (CASE) in late 2011 to fight the tariffs, which stemmed from dumping complaints filed by German-owned SolarWorld Industries America Inc and six other undisclosed companies. They accused Chinese solar panel makers of selling products in the US at less than fair value, bringing unfair competition and causing job losses.

"This is not a good outcome for the US solar industry," Jigar Shah, coalition president, said of the tariffs. CASE mainly consists of companies that install solar panels made in China.

China imports about $2 billion in polysilicons, ethylene vinyl acetate and other solar-panel materials from the US every year, according to the China Chamber of Commerce for the Import and Export of Machinery and Electronic Products. In 2011, the United States imported $3.1 billion in solar cells made in China, according to the Commerce Department.

Some energy experts agree that the tariffs will harm the US solar-power industry, including jobs.

"It's bad for US solar developers because the prices are going up. In all fairness, solar on the demand side has been given subsidies for quite some time; solar has never been on a level playing field," said Aaron Chew, a senior analyst at investment firm Maxim Group in New York.

"The irony is, all the major players in the Chinese solar industry such as Suntech Power Holdings have figured out a way to work around the tariffs. They are going to buy cells from Taiwan or Korea."

Mark Bachman, who analyzes the renewable-energy industry for Avian Securities LLC, said the duties have slowed the pace of solar-power installations in US homes and businesses.

"Shipments of cells have slowed and projects aren't as robust," he said. "Do I think the tariffs hurt US demand? The Chinese are now not shipping in those high-quality products. What the Chinese are shipping in are cells of standard quality.

"The tariffs are clearly affecting us now. If you think about this, there are a lot of American workers employed by these Chinese companies, not just in those project development and installation companies."

On Sept 6, the European Union announced that it will investigate whether Chinese companies are selling solar panels at unfairly low prices in Europe, based on a complaint by Germany's SolarWorld AG and two dozen other European manufacturers. The probe is one of the EU's biggest ever involving unfair-trade allegations.

Authorities in China, which has made the solar-energy industry a top priority for growth, have criticized both the US and EU anti-dumping actions as groundless.