"With the slow economy but well-established capital markets in the US, we private-equity funds are presented with numerous opportunities," said Wang Shaojie, president of the Zhongguancun Private Equity and Venture Capital Association, a Beijing-based industry group.

Wang recently led a group of eight managers from Chinese PE firms on a two-week scouting trip in the US. The delegation, representing firms with total investment of $1.5 billion across industries, first stopped on the West Coast for visits to companies including Facebook Inc and Amazon.com Inc.

US technology companies, whether industry leaders or startups, would be a relatively easy fit for these Chinese investors, Wang said, since many have tech holdings back home.

The association, which was formed in January, has about 1,000 member PE firms from across China that manage a total of $15 billion in assets. Most of the firms are invested in startups in Zhongguancun, a technology hub in Beijing's Haidian district that is sometimes called "China's Silicon Valley".

Wang, a former official of the People's Bank of China, the country's central bank, who later worked for Industrial & Commercial Bank of China Ltd, said he wants to build an international platform for China's private-equity industry. He sees great potential in the sector, which has taken off in recent years due to the size and continued growth of the Chinese economy. 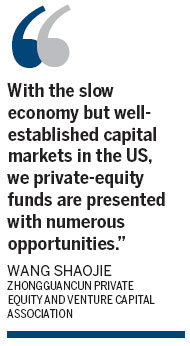 Among emerging markets, only China has provided PE funds with meaningful liquidity, according to US-based management consulting firm Bain & Co. Between 2007 and 2011, greater China accounted for less than half of PE-backed investments in the emerging economies of Asia but generated about 80 percent of all exit activity and 90 percent of the region's initial public offerings of stock.

China has recently eased regulations on private equity, with the government even promoting capital-raising and investment by the industry, according to Preqin, a PE research and analytics firm.

According to Wang, it's time for Chinese PE funds to be more international and better connected to capital markets abroad. The Zhongguancun association, he said, attempts to help Chinese PE firms navigate these markets and become bona fide asset managers.

"The US capital markets are more mature than China's. We can definitely learn a lot from them by having this kind of exchange. What we can offer the US market is capital," Wang said.

Former US commerce secretary Carlos Gutierrez, told China Daily at the conference last weekend that Chinese PE managers should base investment decisions on "market demand", wherever it may arise.

"It's about understanding consumers and business customers and trying to satisfy their needs, and that could be in so many areas - the energy and technology sectors," said Gutierrez, who is now vice-chairman of Citigroup Inc's institutional-clients business, which among functions helps Chinese companies expand internationally.

Big opportunities for Chinese PE firms over the next five to seven years are likely to come from full convertibility of the yuan currency, which will boost liquidity of China's markets and further open the country to foreign investment, Anthony Roscigno, managing director of private equity for JP Morgan Asset Management, told the conference.

Because of partnerships with US counterparts, a number of Chinese PE firms are able to raise capital from deep-pocketed institutional investors abroad much more easily than publicly traded Chinese companies can, Roscigno said.

James Sweeney, senior global fixed-income strategist for Credit Suisse AG, told China Daily during the conference: "Chinese investors can take the advantage of the reluctance of American and European investors."

He advised Chinese PE investors to look for investment opportunities beyond the US tech sector. An alternative, Sweeney said, are construction companies in the recovering US housing market. Many are "credit-constrained" because of difficulty in getting financing from traditional domestic lenders.

"Smaller construction companies, which is roughly 80 percent of the US construction market, have to buy and use the land as collateral to get the mortgage to finance themselves, and because banks already have significant exposure to household mortgages," he explained.