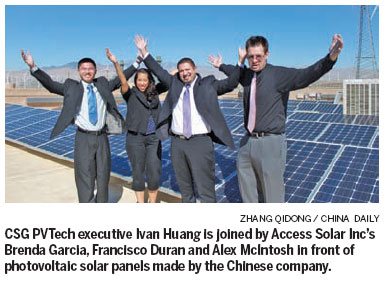 Company CEO Jack Pryor is describing his vision to make Access Solar a leading distributor and installer of solar equipment for homes and businesses in Southern California.

His path to that goal goes through China - specifically, Chinese manufacturers' electricity-generating solar panels and modules.

Pryor's one-year-old company has hitched its star to CSG PVTech, one of China's biggest solar-panel makers, in a bid to harness energy equivalent to 1,200 suns to meet the local market's steadily growing demand for renewable power.

"Our goal is to create the world's simplest and lowest-cost PV solution to green energy," Pryor told China Daily. "With our Chinese partner, we are able to ensure access to the latest renewable-energy sources and technology."

Pryor is a developer and builder with a background in the design and engineering of electrical equipment.

Now focused on renewable forms of electricity, he conducted a lengthy screening process to find the right partner for Access Solar before selecting a subsidiary of CSG Holding Co, a leading Chinese manufacturer of industrial glass.

"The quality of their product, their 28 years of PV manufacturing history, and their technology-quality control of the main ingredient in PV convinced us that CSG is the best company from which to purchase PV products," said Brenda Garcia, marketing director for Access Solar.

Ivan Huang, sales manager at CSG PVTech's US office, said the Chinese company had been seeking US distributors such as Access Solar. Less than a year into their distribution partnership, the companies are eager to explore a possible strategic partnership, which would bind them closer.

Although the business relationship is still young, Access Solar expects to significantly increase its purchases of CSG solar gear in the near future, Garcia said.

The fruits of the international partnership can be seen at Carmen Meadows, a housing development under construction in Cabazon, a desert community half an hour by car from Access Solar's office.

The 9.3-acre (3.7-hectare) complex of 40 single-family homes for low and moderate- income residents looks much like other tract housing that has sprung up in Riverside County in recent years.

But beyond amenities such as a community recreation room and swimming pool, Carmen Meadows will be powered solely by the sun - up to 1.5 megawatts of inexpensive electricity provided with sustainability in mind.

Its proximity to the tony retirement and tourism hotspot of Palm Springs, emphasis on renewable energy in low-income housing and its Chinese partnership is likely to draw attention to the project from both sides of the Pacific.

"We would like to attract investors from China to come and see what we can offer, and invest in our project through the EB-5 immigration investment program," Garcia said, referring to a US government initiative to fast-track resident visas for foreign investors.

The market potential in the sun-drenched California desert is huge, the Access Solar executive said.

The company's to-do list includes installation of CSG-made solar panels at a 100,000-square-foot (9,290-square-meter) warehouse as well as farms, numerous houses and the rooftops of commercial buildings.

Huang, however, is concerned about recent US anti-dumping tariffs against Chinese solar-equipment makers. He said the steps taken by Washington to counter what it claims is deliberate flooding of the US market with subsidized goods could hurt CSG's US operations.

"The premium anti-dumping rate announced in May was a lot higher than we expected," Huang said. "If the Commerce Department continues to increase the rate, the added cost will eventually apply not only to manufacturers, but also to distributors and, eventually, customers.

"Energy shouldn't be a luxury; it should be something cheap and easy, no matter who makes it," he said.

CSG, he added, could be forced to source production of its panels and modules from Taiwan or South Korea, which would lead to higher prices and likely erode profit margins.

Access Solar's Garcia said the California installer isn't concerned about the ongoing trade dispute between the US government and Chinese manufacturers but plans to continue working with CSG in any event.

"No matter what happens, we are determined to purchase the best products in the world," she said. "We are very involved with our local community and we know the market here. With a strong partner like CSG, we can accomplish a great deal."

Chen Jia contributed to this story.