Chinese firms up stake in US 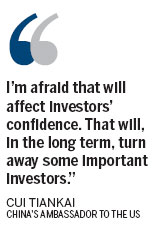 China's direct investment in the United States showed strong momentum in the first three months of this year despite a weak fourth quarter of 2012 and the negative impact of national security concerns on some deals.

During the first quarter, Chinese companies concluded eight mergers or acquisitions and nine greenfield investments - those involving construction of factories or offices - worth a total of $2.2 billion, according to a report released on Tuesday by Rhodium Group, a New York firm that tracks Chinese investment in the US.

Chinese acquisitions in the US now under discussion or awaiting regulatory approval have a total value of over $10 billion, the highest ever for the category, according to Rhodium's report.

It also found that privately held Chinese companies have increased their investment in the US. Over the past 15 months, they spent more on US deals than in the previous 11 years combined.

State-owned enterprises, or SOEs, have long dominated foreign direct investment by China in the US, but private companies accounted for 80 percent of deals and 50 percent of deal value from January 2012 through March of this year.

Hanemann attributed SOEs' reduced involvement to changes in the Chinese leadership, a related shuffling of management at major State companies and private companies' growing interest in medium- to large-scale deals.

The Rhodium Group report also shows that Chinese companies have become adept at closing complex transactions and navigating US regulatory and political spheres.

According to the report, US subsidiaries of Chinese companies employed an estimated 32,000 people at the end of the first quarter, 2,000 more than were employed during last year's fourth quarter.

That period, much like the fourth quarter of 2011, was slow. Chinese companies closed only eight deals worth $178 million between October and December. Overall, though, 2012 was a record year for Chinese direct investment in the US, totaling $6.5 billion.

A US judge has yet to rule in a lawsuit by Chinese-controlled Ralls Corp challenging President Barack Obama's nullification in September of a deal for Oregon wind farms located near a US Navy weapons-testing facility.

The recent quarter also was marked by controversy generated from a US cyber security firm's published claims of hacking by a Shanghai-based military unit. The Chinese government has denied the allegations.

Cui Tiankai, China's new ambassador in Washington, expressed concern over barriers to Chinese FDI in the US. He said he hasn't been persuaded by US regulators' stated reasons for rejecting some deals.

"I'm afraid that will affect investors' confidence," Cui told the Committee of 100, a Chinese American group, last week. "That will, in the long term, turn away some important investors."

The Economist Intelligence Unit recently projected a 50 percent jump in such investment, to $172 billion in 2017 from $115 billion last year. That would far exceed the amount of foreign investment money flowing into China.

Cui said the US has historically been a strong advocate of liberalized trade and investment and pressured China to adopt such policies.

"But today it seems that it has been the banner of China. What has been preached to us is not always practiced," Cui said, hinting at recent actions that Beijing regards as US protectionism.

There is a misperception that Chinese investment in the US is unwelcome, said Viking Weiqiong Tao, a lawyer with Dallas-based firm Kane Russell Coleman & Logan. She cited the Ralls wind-farm case and an October 2012 congressional report accusing Chinese telecommunications-gear makers Huawei Technologies Co and ZTE Corp of posing a national security threat to the US.

"But the US will remain an attractive destination for Chinese investment," Tao said. "Its huge market, advanced technology, and relatively safe and stable investment environment are too significant to be ignored."