Amway sellers give back in rural programs 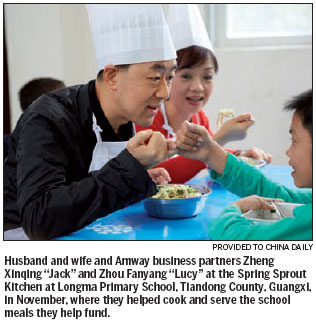 Zhou Fanyang remembers how little she and her husband, Zheng Xinqing, had when they were newly married and she was working as an accountant and he as a financial manager

"We were very poor and my husband invited me for a cup of coffee," she said, "and in fact he couldn't afford that cup of coffee and I had to help him pay. When we left that coffee shop, we didn't have one penny in our pockets."

Then one day in 1995, another accountant at her firm invited Zhou, who also goes by "Lucy", to an Amway seminar. Neither she nor her husband ("Jack") knew much about Amway and didn't use the company's products.

"I wasn't that willing to go, but because she was my colleague, I went along," Lucy recalled.

That decision changed everything for the couple. Michigan-based Amway Corp, a global direct seller of home goods, nutritional supplements and cosmetics, has its biggest market in China, with sales in 2012 of $4.3 billion. that was 38 percent of the $11.3 billion in worldwide revenue reported by Amway's parent company, privately held Alticor Inc.

Lucy, Jack and their friend signed up with Amway 18 years ago and have since become members of the Founders Council, a distinction the company bestows on its top performers and that takes them to leadership conferences around the world. One of these was recently held at the Four Seasons Hotel in New York, where China Daily interviewed the couple.

"When I was an accountant, I only purchased things," Lucy said. "I never had the experience of selling things to others. At the start, I didn't believe this was the business for me, but my sponsor told me to just share my experience using the product. And that I can do.

"So if I enjoy cosmetics, for instance, because they make me look more beautiful, I certainly like to share my experience with my friends."

They have a central work space and several branches around the country. they do a lot of traveling and teleconferencing with contacts in places they can't get to. Mobile phones, better roads and highspeed trains have brought great changes to their business since the days of pagers.

"This business takes the two of us," Jack said. "We work together and there is no distinction between our work."

Jack said Amway has provided the couple an opportunity to help themselves and others. He and his wife have made sizable donations in response to disasters in China, such as the

Sichuan earthquakes of 2008 and last month. Ten years ago, they supported a friend's

adoption of six orphans; those children are now grown. they have also paid the tuition of

One of their most personally rewarding activities has been an Amway charity program called Spring Sprout Kitchens.

"It targets rural children whose parents have left to work in cities," Jack said. "We call them the left-behind children. Sometimes they have to travel long distances to get to school and there they have to eat cold food that has little nutritional value."

The Spring Sprout Kitchen program has a four-pronged approach, Jack explained: First, determine how many children are in need and how best to assist them; second, establish standards for food to be provided; third, ensure that the process is supervised by local government officials and Amway volunteers as well as independent observers; and finally, evaluate progress by monitoring participating children's height and weight.

Lucy said she vividly remembers their first trip to one of the several Spring Sprout Kitchens she and Jack have funded.

"Our 8-year-old daughter voluntarily asked to spend her own pocket money during Spring Festival to buy school supplies for the schoolchildren," Lucy said. "The headmaster of her school was so touched by her generosity that he called on her classmates to learn from her."