Japan's Mainichi Shimbun newspaper reported that Momii said at an NHK budget meeting held on Tuesday by the ruling Liberal Democratic Party: "I will be more cautious by understanding a situation before making a statement in the future.

"To eliminate the mistrust - which I am responsible for - I will work and fully engage my heart and soul."

Kennedy, the daughter of the US president John F. Kennedy, turned down the NHK interview request because of the "controversial remarks about wartime sex slavery made by the president of the company", Kyodo quoted sources close to the decision-making process as saying on Monday.

Tadamori Oshima, former deputy chief of the ruling party, told Momii that "mistrust is coming from inside and outside (NHK). It is the responsibility of the president to rebuild trust".

Momii made international headlines last month with his defense of the Japanese military forcing women in occupied countries into sexual slavery in the 1930s and '40s. When asked about "comfort women" at a news conference in late January, he said such institutions of sexual slavery existed in "every country" and that it is only considered wrong based on "today's morality".

Media reports said the NHK chief is believed to be close to Japanese Prime Minister Shinzo Abe, who has repeatedly called for revising Japan's postwar pacifist Constitution to allow a Japanese military buildup.

Nobuo Ikeda, a professor at Jobu University in Japan's Gunma prefecture and a former NHK correspondent, said Abe probably aimed to use NHK for publicity overseas.

But "the president and board members cannot and should not exert influence upon the field operations" of NHK, Ikeda said in a recent article.

Liu Jiangyong, a professor of Japanese studies at Tsinghua University in Beijing, said Abe and his followers in the NHK are challenging Washington's outlook on history and World War II, and their inflammatory remarks "have irritated the US". 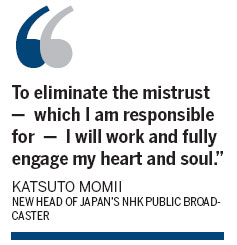 "Obviously, the Japanese Cabinet has not followed suggestions from Washington to refrain from provocation and repair the strained relationships with China and South Korea. Washington has to place Abe's persistence in check," Liu said.

Adding to the controversy, Naoki Hyakuta, a best-selling author on Japan's kamikaze fighter pilots and an NHK governor, said this month that the 1937 Nanjing Massacre - committed by the invading Japanese army - "never happened", and that the United States staged the postwar trial of Japanese leaders to cover up its own war crimes.

Jackson Diehl of the Washington Post wrote in a column on Monday that Abe is leading Japan "into one of those dynamic and potentially dangerous eras".

"Abe has appeared to pivot toward the hard-line nationalism that has always been an element of his political makeup. He has managed to set off alarm bells not only in predictable places - China and South Korea - but inside the very US administration he hoped to partner with." Diehl wrote.

While China and South Korea are both outraged by Abe's Dec 26 visit to the Yasukuni Shrine, where 14 Class A war criminals from WWII are honored, Abe, a right-wing politician, is likely to pay tribute to the shrine again this year.

Diehl believes Abe's visit to Yasukuni has destroyed any possibility of detente in Tokyo's frozen relations with Beijing and Seoul. "Yasukuni and its aftermath have also badly damaged relations between Abe and the Obama administration," wrote Diehl, quoting observers as saying that a communications gap has opened up between Washington and Tokyo more profound than that even with Beijing.

It was reported that US Vice-President Joe Biden had tried back in December to persuade Abe to abandon the trip to Yasukuni but failed. The US has later repeatedly expressed its disappointment at the visit and described the action as exacerbating tensions in the region.

P.J. Crowley, former US assistant secretary of state for public affairs and now a professor at George Washington University, believes that Abe will listen carefully to what the US will tell him.

Wang Xu contributed to this story.

Police to root out organizers of prostitution

Li to officials: Move ahead with improvements