For the second year in a row, the number of applications from Chinese students to get into US graduate schools has declined, according to a report.

Applications for this fall dropped 1 percent following a 3-percent drop a year earlier, said the report from the Washington-based Council of Graduate Schools.

The overall application number for US grad schools was up 7 percent, the report said, with the greatest growth - 32 percent - from India, for the second consecutive year. "It's all India," said Debra W. Stewart, the council's president.

"Dismissed by some observers a year ago as an aberration, the cooling of the Chinese market no longer can be written off as a one-year blip," said the report.

"Chinese graduate applications - and enrollment - have climbed upward, regularly and robustly. With double-digit annual growth, Chinese students have come to account for fully one-third of all foreign graduate students on American campuses, and their presence has helped offset flat-or in some disciplines, even declining - interest in graduate education among domestic students," the report said.

But the latest findings "turn the trend line of recent years on its head," added the report.

The council said the data are preliminary, but final enrollments tend to closely track application trends.

The decrease in applications from Chinese students could "reflect more-permanent changes," according to the report. "China has been spending big to improve its own research universities, a move that could persuade promising doctoral students to stay at home," it said. "As more Chinese students, both graduate students and undergraduates, go to the United States and other Western countries to study, there also is a growing debate in China about the value of an overseas degree."

The report said there is no evidence yet that undergraduate enrollments from China are declining, US colleges which rely heavily on full-fee-paying Chinese undergraduates to offset their own budget cuts "are likely to be watching closely to see if the council's numbers are a bellwether of broader declines."

The survey was conducted in February and March of the graduate-school council's 509 American members. 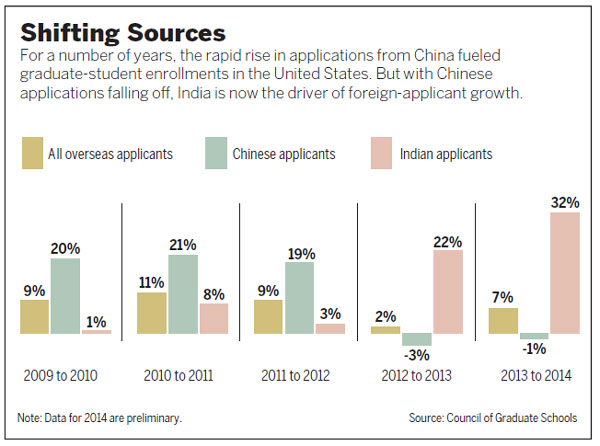