Indications that US beef exports to China may resume this year after a decade-long ban positions US farmers and ranchers for a big windfall, a US beef-industry economist said.

"China would add significantly to the portfolio of US beef export markets, and would help increase returns to American farmers and ranchers," Erin Borror, an economist with the US Meat Export Federation in Colorado, told China Daily on Monday.

The world's fastest-growing beef market last year and the fifth-largest buyer of imported beef by volume, China is striving to work out issues that would allow imports of US beef to resume for the first time since 2003 when a Washington State outbreak of "mad cow disease" prompted Beijing and other countries to restrict them, Nancy Degner, executive director of the Iowa Beef Industry Council, said.

Mark Fischer, agriculture marketing manager with the Iowa Economic Development Authority and a member of an Iowa beef industry trade mission to China last month, wrote China Daily in an email that although no date for a resumption of China-bound US beef exports has been announced, "it is hoped that beef exports will resume in the summer/fall time period".

"We are optimistic that the two countries are working to resume US beef exports," Fischer wrote. "Chinese demand for beef is growing and the US has the ability to supply high quality, grain-fed beef."

Potential buyers of US beef in China "want (the market) open", Degner said in an interview. Demand for beef in China has soared in the last two years, fueled by rising incomes and low domestic supply. Most of China's beef imports today are supplied by Australia, Uruguay, New Zealand, Canada and Argentina.

Mad cow disease, formally known as bovine spongiform encephalopathy, is a brain-wasting condition that typically affects cattle. Its nickname comes from its ability to cause the animals it infects to stagger crazily. Humans who eat food from an infected cow can suffer a fatal degenerative brain disease that has no known cure. About 150 people are known to have died from the disease, mostly in the UK.

Sixty-five nations implemented full or partial restrictions on US beef imports because of concerns that US testing lacked sufficient rigor. US beef exports dropped to 322,000 metric tons in 2004 from 1.3 million metric tons in 2003, before the first mad cow was detected in the country.

Beijing, which halted US beef imports after the US agriculture department confirmed the first US mad cow case, has promised in recent years to ease the ban. If the restrictions were relaxed, the US industry would target China's chain restaurants, fine-dining hotels and retail stores where demand for high-quality beef is heaviest, Degner said. The exports also would target the market for cattle entrails and internal organs that are eaten in China.

Dean Black, who represented the Iowa beef industry council on the March 31-April 4 China trade mission, said China has taken steps to improve its food safety by imposing stiffer rules on producers and upgrading its temperature-controlled storage and distribution system.

"We toured a huge brand new cold storage facility in Nanjing and one being built in Suzhou," Black was quoted in a release on the Iowa Beef Industry Council's website. "Each will allow for a thousand or more wholesale 'meat shops' to be indoors, without electricity and near the freezer storage building." 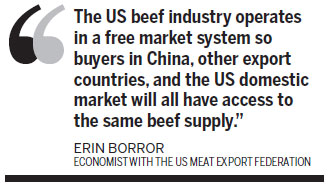 The online market holds "great potential" as a way to sell US beef to China, Black was quoted as saying. China's financial capital, Shanghai, boasts one of the world's fastest growing e-commerce markets with "young people ordering food online for delivery to their homes and offices due to the dense population in high-rise housing", Black was quoted. In just one week, an online pork promotion by the US Meat Export Federation generated sales of approximately 10,000 metric tons of pork, he said in the release.

Late last year, China promised to ease restrictions on imports of US beef following the annual US-China Joint Commission on Commerce and Trade meeting in Beijing. A Chinese deputy commerce minister, Wang Chao, told reporters at the time the two sides had agreed to "promote US beef exports to China" but gave no details. A deputy agriculture ministry, Niu Dun, said the sides would work on technical issues but gave no timetable for when full-scale imports might be allowed.

Borror said US beef production is expected to decline by about 5 percent this year and remain stuck for the next few years. A lack of pasture grass in drought-plagued states such as Oklahoma, Texas and Colorado has reduced herd numbers and limited US beef export volume growth, the economist wrote.

"But our international customers continue to pay higher prices for US beef," he wrote.

Fischer said that despite the drop in US beef supply due to the drought and rebuilding of the cattle herd, "numbers in Iowa are stable".

"The US beef industry operates in a free market system so buyers in China, other export countries, and the US domestic market will all have access to the same beef supply," he said.