The boom in exports to China continues in Washington 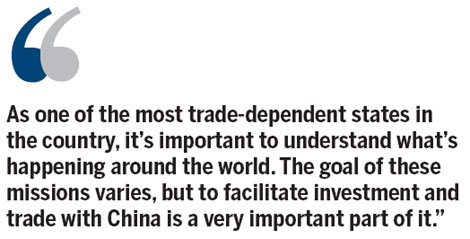 "International trade is incredibly important to the state of Washington, and China is now our top market for exports," Washington Lieutenant Governor Brad Owen told China Daily recently in his office in Olympia, the capital of Washington.

Having served as acting governor for four straight terms since 1996 and chair of numerous committees including the Legislative Committee on Economic Development and International Relations, Owen has made nine missions to China since 2002. "As one of the most trade-dependent states in the country, it's important to understand what's happening around the world. The goal of these missions varies, but to facilitate investment and trade with China is a very important part of it," he said.

"The Lieutenant Governor and the Lieutenant Governor Office serves as a communications conduit between organizations and Chinese contacts," said Spencer Cohen, senior policy advisor, Washington Economic Development Commission. "Working with numerous associations over the years, both US-based and China-based, they have promoted a stronger trade bond with China".

Washington-origin exports soared 21 percent to a record $64.6 billion in 2011, riding largely on the expansion of the Chinese market.

Since 2007, China has become Washington's largest export market in the world. In 2011, Washington exported $11.2 billion in merchandise and commodities to China, an 8.7 percent increase over 2010. This figure does not include the exports of services, such as software, architecture and engineering services, and education.

Washington's economy is highly linked to the aerospace industry. There are 650 aerospace-related companies in Washington besides Boeing Co. Boeing accounted for the majority of 2011 Washington exports to China, totaling $4 billion in value.

Expansion of restaurants and supermarkets in China has provided new investment opportunities for Washington products. Agricultural products, primarily grain, soy, salmon, apples, and candy (Almond Roca), are main components of the rest of the exports.

The state ranks second nationally for premium wine production and 43,000 acres (17,401 hectares) are planted to vinifera grapes. "The recent increase of wine consumption in China created a potential market for us to break into," Owen said.

The lieutenant governor is confident more Chinese companies will move to Washington. "There are many reasons for them to choose Washington since we have advantages in 'professional side, people side, and business side'," he said.

"We have some very important advantages relative to other states in areas of industrial electricity rates (cheapest in the US, with 73 percent coming from hydro), human capital (one of the most educated workforces in the US), high- tech industry sectors (ICT, life sciences and global health), and global connections (one of the most active port systems in the US, and the closest distance to Northeast Asia)," Spencer added.

To encourage more significant Chinese investment, the State Department of Commerce is working with the Trade Development Alliance of Greater Seattle, ADOs, the Washington State China Relations Council, and other partner organizations to coordinate efforts to welcome inbound delegations and market the state as a place to do business. "We try to connect investors to proper locations, contacts and resources," Owen said.

"The federal EB-5 visa program, which will give foreign nationals an opportunity to invest in local projects in exchange for US green card eligibility, is a very successful program to attract investment to the state," Owen said.

Washington has 11 EB-5 regional centers, and they cover a wide geographic scope across the state and specialize in a variety of industries including air cargo, healthcare, transportation and hospitality. 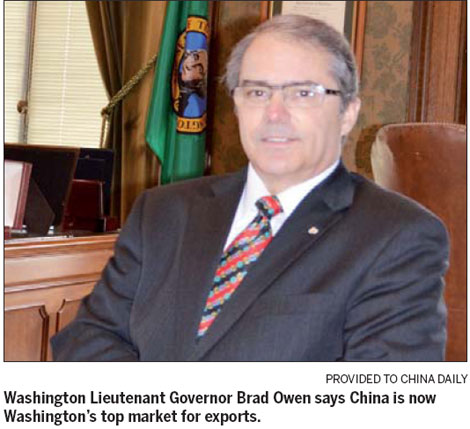