Growing economic demand from China has the "tangible" power to create more jobs in the United States than would otherwise be possible, President Barack Obama's chief economic adviser said Thursday.

"Most important is to have that type of growth everywhere, including China, but also the type of trade and currency policies that make job creation possible," Gene Sperling, director of the White House National Economic Council, told China Daily on the sidelines of a financial forum in Washington.

"It's a two-way street as much as possible, and even more the case when Chinese demand is growing. That is having a more tangible and notable effect on US job growth and US exports," Sperling said in an interview.

The veteran Democratic Party insider - he also advised Bill Clinton - spoke earlier at the Bertelsmann Foundation-Financial Times forum on jobs and growth. China Daily was the media sponsor of the two-day event.

Labor Secretary Hilda Solis said the US would enhance its competitiveness by giving a greater number of talented foreign-born graduates the chance to stay in the country rather than move elsewhere.

"Many companies tell me they can't attract and keep highly qualified and skilled individuals from countries like Germany, India and China," she said.

"If we were able to keep them when they're done with school and provide them green cards, that would help us create innovators and keep them here, and help our economy recover."

US officials have pinned hopes for a more robust recovery on increasing the number of students and tourists from China.

Both are already important to the financial health of the US education and travel sectors.

The US State Department said on Wednesday that its consulates in China issued 453,000 visas in the first half of the current fiscal year (October-March), a 46 percent jump from the same period a year ago.

A Wall Street Journal report on Wednesday described Beijing and other Chinese cities as "magnets for young expats in the way that Paris was after World War I and Prague was after the Cold War. The dollar is still strong, jobs are plentiful and the bar scene vibrant."

Chinese economic power globally was also noted at the forum.

"China is a very important opportunity for us in terms of trade, investment and cooperation in technology." 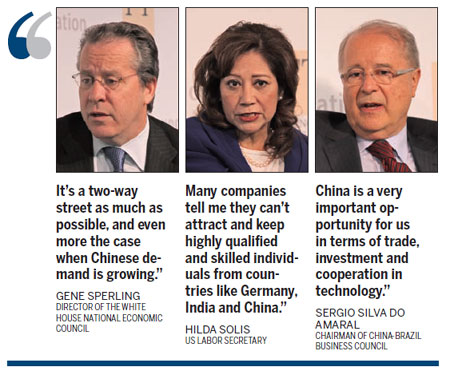