Yibin Cai, founder and director of the DC Chinese Film Festival, can hardly believe the scale the event has grown to in so short a time.

A nonprofit event dedicated to discovering excellence in Chinese cinema around the world and encouraging cultural diversity through film, the festival has blossomed into an international gathering that this year on Sept 4-7 will showcase 54 outstanding films from eight countries, selected from 329 works from 29 countries and regions, all either about China or made by Chinese artists.

The films are all bilingual with English subtitles. The screen locales include the US Navy Memorial Heritage Center, the Wilson Center, the Smithsonian Freer Gallery and American University's Malsi Doyle and Michael Forman Theater.

There will also be three panel discussions with experts on women and film, lesbian, gay, bisexual, and transgender (LGBT) issues in film and environmental filmmaking in China. Panelists will discuss the challenges and opportunities faced by filmmakers who document and explore these issues through film.

The Golden Gate Girl has been chosen as the festival's opening film as a tribute to Chinese American film pioneer Esther Eng, an openly gay female director who bridged different cultures and nationalities in her stories. Golden Gate Girl explores Eng's life and turbulent times as she crossed the boundaries of language, culture, race and gender on both sides of the Pacific.

Yibin Cai founded the festival in 2011 when he was a PhD student in biological sciences at the University of Maryland. It started as an experimental video contest among local students. The coverage expanded to New York and California. 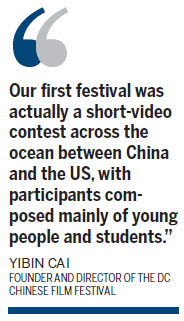 Collaborating with media like Tudou, a well-known Chinese video-sharing website that has created a video screening area for the festival, a connection with domestic film-lovers and filmmakers was created.

"Our first festival was actually a short-video contest across the ocean between China and the US, with participants composed mainly of young people and students," Cai said.

Most of the films submitted to the first festival are available for viewing on Tudou. Eight medium- to full-length films are screened at universities.

On June 10, 2012, a film awards ceremony was held in the University of Maryland, which became a turning point for the festival, as Cai and his colleagues decided to make something bigger happen.

The organizing committee started to recruit members beyond film enthusiasts, more professionals from the industry, to join in. Xiaozhou Xie, deputy director of the festival, is a media graduate from American University.

Meng Li, another deputy director, is a director with CCTV America and Zhao Liu, director of programming, is a filmmaker himself, who also submitted work to the first festival and won the Experimental Pioneer Award.

The film entries submitted to the second festival this year are being held to much higher standards than in round one. Cinematic craftsmanship, content, theme, the art of performance and social significance are all taken into consideration by the judges.

The jury includes dignitaries such as: Peggy Chiao, a film producer, writer and professor, who is considered one of the important figures in shaping New Taiwan Cinema in the 1980s and 1990s and a major force in series; Carma Hinton, a documentary filmmaker and Clarence J. Robinson Professor of Visual Culture and Chinese Studies at George Mason University; Yizhong Li, a doctoral adviser at School of Media and Film Design of Shanghai JiaoTong University and deputy director at the Center for American Film Studies at Shanghai JiaoTong University.

Cai said the festival aims to serve filmmakers, recognize important works of emerging talents and provide a showcase for them to demonstrate originality in their work, which is also the core value of the organization, adding that great film works are free of affectation and down to earth.

"Personally, I don't think films can change people's lives," Cai said. "However, it will provide a new perspective and meaningful experience, which will enrich life's horizon, letting people learn about a more diversified life."

US urged to stop recon

US firm partners with stevia maker