Many Chinese students studying in the United States are attending two-year community colleges to save money and then transferring to four-year universities to get their bachelor's degrees, Deng Yu reports from Seattle.

For dozens of students crowded into the ShoWare Center in Kent, Washington, on June 14, it was this year's commencement ceremony for Green River Community College. For Chu Zhiyun, an 18-year-old from Chengdu, China, it was the start of her American education dream. After completing 109 credits in courses over seven quarters at Green River, Chu has been accepted to the University of California San Diego and five other universities, most of them in California.

For the students, it means saving money. Tuition at publicly supported community colleges can be one-third to one-quarter of university tuition. For the schools, they increase the diversification of their student body and get higher tuition for the non-US citizens. The tuition is enough incentive for some two-year colleges to make regular recruitment trips to China and promote themselves as a pathway to a bachelor's degree.

"We have been working with American universities, including top ones, to build transfer routes," said Ross Jennings, vice-president of the Green River Community College, whose main campus in Auburn is about 30 miles of Seattle. "This model is especially welcomed by Chinese parents." Ross returned from his last recruitment trip to China two month ago.

Washington State's proximity to China makes it an attractive destination for Chinese students. The number of Chinese students at Green River leaped to 562 this year from 8 in 2007.

Tuition for a fulltime Chinese student and other international students at the state-supported school for the academic year 2012-13 was $9,600. Living in a dormitory can bring the total amount to about $20,000. For a state resident, tuition was about $4,500 and $4,900 for a non-resident US citizen.

At Shoreline Community College, 9 miles north of Seattle - which began developing international education programs 30 years ago and where more than 98 percent of international students continue on to earn a four-year degree based on recent data - the number of Chinese students increased by 58 percent last year (65 by the spring of 2012 and 103 by the spring of 2013). Tuition for the full academic year 2012-2013 was $9,101 for an international student, $3,866 for a state resident and about $6,539 for a non-resident US citizen.

Marci Franklin, assistant director of international outreach at Shoreline, said the school has emphasized the recruitment of Chinese students since 1 1/2 years ago. "Now we even use the Chinese social media such as Weibo to promote our international program in China," she said. 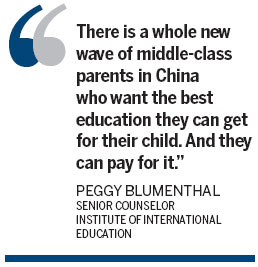 China's increasing wealth is allowing many families to afford their only child's education abroad. China's Ministry of Education reported that 374,500 of 399,600 students who went abroad to study last year did so at their own expense.

"There is a whole new wave of middle-class parents in China who want the best education they can get for their child," said Peggy Blumenthal, senior counselor to the president at the Institute of International Education. "And they can pay for it."

There were 194,029 Chinese students studying in the US in the 2011-12 academic year, representing the largest group of international students from a single country and accounting for 25.4 percent of all foreign students studying in the US, followed by India, South Korea, Saudi Arabia and Canada, according to the "Open Doors" report last year by the Institute of International Education.

For the first time, there are more international undergraduate than graduate students in the US, with Chinese student enrollments increasing by 31 percent at the undergraduate level.

According to the American Association of Community Colleges, 13 percent of all international students enrolled in two-year community colleges in 2012 were from China, making it No 2 among all countries sending students to US community colleges (South Korea is No 1).

Community-college enrollments accounted for less than 6 percent of the total number of Chinese students in the US in the academic year 2010-11, while as a percentage of the total international body, Chinese students in a two-year school represented just 1-in-10 students, versus more than 1-in-5 of all international higher-education enrollments, according to the data by World Education Services.

In Chu's class at the Chengdu Foreign Languages School, more than 10 of the 50 students went abroad to study before they finished school. "It is not uncommon at least among my high school classmates," Chu said. "We prepared the application to foreign schools and went to Hong Kong together for the SAT Reasoning Test."

She said most of the students went to the US, and others went to Britain, Canada, Spain and Italy. "Britain is expensive. Canada is easier, while the US has quality higher education and the tuition is reasonable," Chu said.

Many community colleges also offer the "2+2" degree option. It enables students to make concurrent applications to four-year schools, take courses recommended by those schools and have guaranteed acceptance to at least one when they complete the associate degree and all 2+2 requirements.

In addition to lower tuition, another reason Chinese students attend community colleges is to develop their English-language skills in preparation for university study.

"My parents think the earlier the better for me to go to the US to promote my English language skill," said Zhang Yiling, a 15-year-old middle-school girl in Beijing, whose parents are consulting friends in the US about how to apply to community colleges.

"The value of speaking English, the value of making connections in the US, and the fact that the Chinese economy is so robust, it's created the perfect storm," said Clay Hensley, director of international strategy and relationships at the College Board.

Some students also save time. Instead of completing high school in China, they attend a community college that offers classes to complete a high school diploma. "It takes hard work, planning and a bit of luck," Ross of Green River Community College said.

"If I were in China, I would have to complete the high school in two years and the university in another four years. But here, I transferred my two-year community-college credits to four-year universities and save at least two years," said Chu, who entered Green River after she finished the first year of high school in China.

Data from the National Student Clearinghouse from summer 2011 to spring 2012 show how prevalent a role two-year institutions play in providing an educational foundation for those who go on to get bachelor's degrees. The study shows that 45 percent of all students who finished a four-year degree in the academic year 2010-11 had previously enrolled in a two-year college.

At Green River, from 2006 to June 8, 2013, 451 Chinese students successfully transferred to four-year universities and 276 of them were accepted by the top 100 US schools, according to US News & World Report's education issue in 2012.

Shoreline Community College hosts a university transfer fair twice a year on campus. Last fall, more than 100 schools from across the US were at Shoreline to recruit students, including the University of California-Berkeley, the University of Washington and Arizona State University.

The large number of Chinese undergraduates on US campuses can present challenges for administrators and faculty members because many of them find it hard to cope with American customs and cultural differences.

There is also concern about potential safety risks at schools in remote or unsafe areas.

Some community colleges offer a course that examines cultural similarities and differences between the US and China. Two years ago, Green River started a program called "Foundation for Success" with mandatory participation by all first-quarter international students. They attend a weekly workshop with peer mentors and program staff where they learn about student life; personal health and safety; effective decision making; and time management. Parents are sent a progress report on their child's well-being and performance.

"This is very useful especially when you don't have to take language class and entered the academic class directly," said Chu. "You don't have much time to understand the American education system from its Chinese counterpart."

"With a larger international counselor team at the international students office (six full-time, two part-time), Green River is trying to help international students quickly adapt to the study and life in the US," Hong Q. Wagner, managing partner for Pacific International Education said. The education company based in Washington State is working with universities and community colleges in recruiting Chinese students.

Green River also produced a foreign-student handbook with questions and answers about studying abroad and American customs. Ross, Green River's vice-president, published a series of guidance reports for international students, with such titles as "5 Tips for Students Before they Study Abroad" and "How to be a Top Student in the USA".

Green River built dormitories and recommends students use its "safety ride" program."The dorms are for all students, domestic and international. Because most domestic students live at home with their families, international students are the major residents," Ross said.

Shoreline President Lee Lambert signed an agreement for a 400-bed dormitory to be built on campus that could house hundreds of students by 2015. If built, the project would also be of significant help in recruiting more international students, according to Franklin of Shoreline Community College.

Some community colleges that relied on Chinese students for their growth now are seeking students from other parts of the world. Saudi Arabia and Brazil have invested in financial aid programs for international education, and are likely to be the next growth areas, according to the "Open Doors" report.

According to the findings of a survey of 239 community colleges (from a total of 1,869 associate colleges nationwide) by the American Council on Education, 50 percent of those surveyed "perceive that internationalization has accelerated on their campuses in recent years."

Among those, just 26 percent have "implemented campus-wide policies or guidelines for developing and approving partnerships or assessing existing partnerships." This compares to three-quarters of doctoral institutions.

China reiterates support for the UN

Drug-related crimes on the rise in Xinjiang