Taxus Pharmaceutical, based in Shanxi province, grows produces and develops paclitaxel, an extract from the taxus tree - also known as the Chinese yew tree - which the company is named after. Founded in 2000, Taxus Pharmaceutical grows yew trees and isolates paclitaxel, which is a chemical used in the treatment of ovarian and breast cancers.

The firm in question reportedly is a regenerative medical company that focuses on tissue repair medications. The company also recently acquired a health supplement brand.

Zhang said in a media briefing that the goal of his acquisition was to "increase the company's speed of expansion into the US pharmaceutical market." 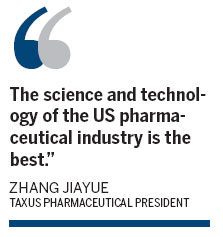 He said that products are of particular interest to Taxus Pharmaceutical, specifically the ones for diabetes patients.

"I feel that the future prospects of these two products are looking very positive," Zhang said. "That's why I'm acquiring this corporation, so that we can try to push the products into the market even quicker, and I also want to build up a platform on which to sell Chinese products in the US."

Zhang said that Taxus Pharmaceutical has plans to list in the US within the next six months, with final details being prepared now.

Taxus Pharmaceutical's acquisition comes as more Chinese pharmaceutical companies are eyeing expansion in the US. In 2012, Nanjing-based Simcere Pharmaceutical Group signed a joint venture with Merck & Co Inc, combining the resources of the two companies to brand pharmaceutical products for cardiovascular and metabolic disesases.

In a high-profile acquisition in 2010, Jiangsu-based pharmaceutical maker Aland Nutraceutical Group acquired New Jersey-based International Vitamin Corp (IVC) for $63.4 million in cash and closing costs. Since the acquisition, IVC has seen sales and employment improve, jumping to No 2 from No 5 in the US private-label vitamin industry, according to IVC CEO Steven Dai.