Singapore's former ambassador to the US said she thinks the United States and 11 other nations in the Asia-Pacific region are closer to setting a sweeping free-trade agreement after negotiators failed to reach agreement but claimed to be moving toward a deal.

Ministers from the 12 countries involved in the US-led proposed Trans-Pacific Partnership wrapped up the latest round of talks in Singapore on Tuesday without reaching an agreement, or setting a new meeting date or site. Meanwhile, growing opposition in the US Congress - including from leading Democrats in President Barack Obama's own party - to free-trade deals also is clouding the outlook for moving ahead.

In a New York-based Asia Society conference call on the challenges confronting the TPP talks, Chan said the ministers' statement that they had agreed on most of the "landing zones" found for many of the remaining disagreements buoyed her hope that a final accord is reachable. 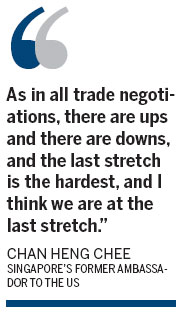 "The word 'landing zone' is the key," Chan said in response to a question from China Daily about how far apart she thought the negotiators were on unresolved issues, which mainly have to do with state-owned companies, agricultural tariffs and intellectual property rights.

"They want to satisfy certain elements - that's what they are looking out for," Chan said.

The TPP is meant to eliminate all tariffs and related trade barriers among economies that comprise 40 percent of global economic output and conduct 30 percent of global trade. Beijing isn't part of the talks. Widely considered the centerpiece of the Obama Administration's Asia-Pacific economic policy, the TPP would bolster US influence in Asia as China's clout in the region increases.

The talks were supposed to conclude last year. But a number of stumbling blocks, especially between the US and Japan about agriculture and autos, meant that deadline was unachievable. One bone of contention is Japan's desire to protect farm products such as rice, beef, pork, dairy, wheat and sugar, while the US is demanding full access for its agricultural goods.

Washington also wants Japan to eliminate technical barriers that hamper sales of American cars in Japan. Meanwhile, the US is reluctant to reduce the tariff it imposes on Japanese cars.

Chan served as Singapore's ambassador to the US during the negotiations for the 2004 US-Singapore free trade agreement. Since she is not involved in the TPP talks, she declined to speculate on the extent of the gap negotiators still have to bridge to get a final accord.

"We cannot categorically say how much was achieved, but negotiators and the ministers - everybody seemed quite happy with the progress they made," Chan said of the Singapore meetings.

The call was part of a series of monthly discussions on US-Asia relations that the Asia Society holds for members, supporters and journalists. In 2012, the organization honored Chan, who also sits on the society's policy institute advisory council and is a trustee, with a diplomatic achievement award.