This week's trip by the US first lady Michelle Obama to China will help improve bilateral relations between the two nations, according to senior White House officials.

"Her visit and her agenda send a message that the relationship between the United States and China is not just between leaders, it's a relationship between peoples," Ben Rhodes, the White House deputy national security adviser for strategic communications, told a conference call on Monday.

Rhodes described that as critically important, given the roles that the two countries are going to play in the 21st century.

"Her focus on people-to-people relations, her focus on education and youth empowerment is one that we believe will resonate in China," Rhodes said.

Rhodes believes a significant benefit of the trip is that it can improve the US-China relationship.

"And we believe that she has proven very capable at doing exactly that in her previous travel, both with the president and independent of the president," he said.

From March 19 to 26, the first lady will visit Beijing, Xi'an and Chengdu with her two daughters, Malia and Sasha, and her mother Marian Robinson.

In Beijing, Mrs Obama will meet President Xi Jinping's wife Peng Liyuan, who came to the US last June with her husband during his meeting with President Barack Obama at the Sunnylands estate in Rio Mirage, California.

While they didn't get a chance to meet because Mrs Obama had to stay in Washington, Peng will accompany her in Beijing to visit a high school, tour the Forbidden City and attend a private dinner and private performance.

Tina Tchen, chief of staff to the US first lady, said she thinks Mrs Obama is very much looking forward to meeting Peng.

In Beijing, Mrs Obama will also speak at the Stanford Center at Peking University, where she will meet with Chinese and American students who have studied in each other's countries. "(This will) speak to how studying abroad and how technology can be a powerful tool for cultural exchange," Tchen said. 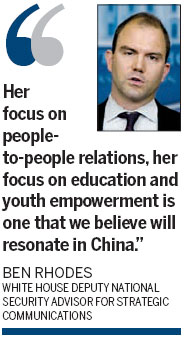 In Xi'an, an ancient city in northwest China, Mrs Obama will visit the Terracotta Warriors and the Walled City. In Chengdu of southwest China, she will deliver her second speech at a local high school, the No 7 School, and meet young people there. The high school is known for its technology and its reach beyond just Chengdu into the rural areas.

Tchen described all those activities as sending a strong message on the importance of education.

Tchen, a first generation Chinese American, believes the Chinese will also appreciate the fact that Mrs Obama will be traveling with three generations. "Chinese would appreciate the ties and bonds the Obama family has with one another across the generations," she said.

Mrs Obama announced her China trip on March 3. The next day, she visited the Yu Ying Public Charter School in Washington that is known for its Mandarin immersion program.

She has encouraged US students to follow her activities in China on a daily blog that she will be posting, complete with videos and photos, as well as answering questions from children across the US.

Mrs Obama learned a few Chinese phrases from the children at the school. Sasha, the younger daughter, had studied Chinese earlier, but is learning another language, according to Tchen.

Bonnie Glaser, senior adviser for Asia at the Center for Strategic and International Studies, said the first lady's visit will emphasize issues that the US and China have in common, like education and family.

"Hopefully, it will help to slow or reverse the current trend, which is toward more negative opinions about each other, that is evident in recent polls," Glaser said.

Orville Schell, director of the Center on US-China Relations at the New York-based Asia Society, believes Mrs Obama's trip offers a symbolic expression of a genuine commitment on the part of the US to do everything it can to achieve some new breakthrough in relations.

"The first lady's upcoming personal visit to China is the perfect prelude to meeting between the US and Chinese presidents later in The Hague," Schell said.

Textiles creats for jobs in Xinjiang

Xi to meet Obama in Europe