The report, Military and Security Developments Involving the People's Republic of China for 2014, said China is modernizing its military capability to prepare for what it termed contingencies in the South and East China seas.

The Chinese navy remains at the forefront of the country's military efforts to extend its operational reach beyond the western Pacific and as far as the Strait of Malacca using large surface ships and submarines, the 96-page report said.

"The main mission for the PLA (People's Liberation Army) is to improve the capacity of its armed forces to fight and win short-duration, high-intensity regional contingencies," it said.

Observers said the US is monitoring Chinese military development in a hostile manner against the backdrop of rising tensions in the Asia-Pacific region.

Su Hao, director of the Center for Strategic and Conflict Management at China Foreign Affairs University, said China has development projects in surrounding waters and its patrols are aimed at safeguarding maritime interests.

The Ministry of Defense described the report as again "stoking up China's military threat".

"It is completely wrong that Washington issues this so-called report year after year, making irresponsible accusations over China's normal development of its national defense and military," the ministry said.

Foreign Ministry spokesman Hong Lei urged the US to stop releasing such reports and to review China's improvement of defense forces rationally and objectively.

"Based on an evaluation of its own environment, China is developing necessary defense forces, aimed at protecting the safety of sovereignty and territorial integrity," Hong said.

The annual Pentagon report to Congress is mandated by the National Defense Authorization Act and Pentagon officials have once again said that they have no choice but to do it every year.

The annual report also said that as China's interests, capabilities, and international influence have grown, its military modernization program has also become increasingly focused on military investments for a range of missions beyond China's coast, including sea-lane security, counter-piracy, peacekeeping and humanitarian assistance/disaster relief. The US has worked with China on some of these missions.

The report said Chinese leaders see this era as a "period of strategic opportunity" to advance national development.

"At the same time, Chinese leaders express a desire to maintain peace and stability along their country's periphery; expand their diplomatic influence to facilitate access to markets, capital, and resources; and avoid direct confrontation with the United States and other countries," the report said. 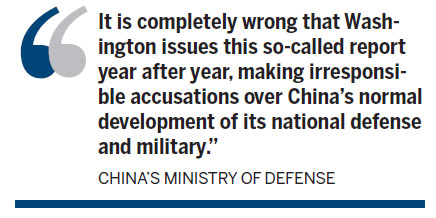 The report said the US-China relationship is expanding and improving. In the military area there are questions about the rate of growth. The report suggested that the Chinese have not been transparent about their spending, with US experts believing the country spends roughly $145 billion on defense, far beyond the $119 billion that China has officially announced.

According to the United Kingdom-based International Institute for Strategic Studies, the US' military spending in 2013 hit $600 billion, compared to $122 billion by China. The US is also encouraging more military spending by its allies, which now totals about $400 billion a year.

Meanwhile, China and the US have witnessed increasing military exchanges in the last two years, but it has been overshadowed by the recent US Justice Department's indictment of five PLA officers for alleged cyber theft of US corporate business secrets, a charge China has denied.

While both seek more cooperation and better understanding, they have also been developing strategies aimed at each other, with China's Anti-Access/Area Denial capability and the US' Air Sea Battle plan. Such strategies have led many, such as former US Deputy Secretary of State James Steinberg and former US ambassador to China A. Stapleton Roy, to worry about a potential Cold War type of arms race.

Domestically, it tries to draw support from Congress for a harsher China policy, while internationally it seeks to taint China's image by hyping a so-called threat, Li said.