How do clean energy entrepreneurs do business in China?

A forum on the topic was held by LA Cleantech Incubator in Los Angeles on Monday, with guest speakers sharing their experiences with local clean technology firms interested in getting their products into China.

Suffering from smog nationwide, China has inherently become a vast market with huge demands for innovative technology, including wind, hydro, solar and nuclear power, as well as green technologies for the automobile industry and real estate market.

The solar power industry, also in an overcapacity situation in China, is rapidly moving forward.

By 2030, 200 GWs (gigawatts) of nuclear power is expected to be installed in China, which means big opportunities for companies in that field.

The automobile industry is accelerating into the green too. According to one study, 175.33 million electronic vehicles have been produced in China since 2013. 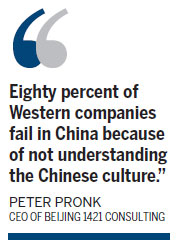 The other big objective of the Chinese government is to stop new coal-fired power plants by 2030 and have all new demand for electricity fully met by clean energy generation.

Pronk told the audience that the Chinese government's current leadership had made a commitment to strengthen supervision and management to achieve its goals in clean energy technology.

While China's demands bring many business opportunities, there are lots of challenges newcomers have to face, especially the reality of overcapacity in renewable energy industries.

"It is the bottleneck in wind and solar power," Pronk said. "It requires that clean tech firms have to really master their technology, which is their core competence."

Beconcini's advice to enterprises included making a full investigation and analysis of the market before entering China and verifying their own IP rights at an early stage.

Pronk highlighted the importance of nailing cultural differences. "Eighty percent of Western companies fail in China because of not understanding the Chinese culture," Pronk said.

Using an infographic created by a Chinese-German artist called "East Meets West", he demonstrated the social and cultural differences that he said all American entrepreneurs will experience when they go to China.

"You win only if you know how to do business in China," he said.

"You don't have to speak Chinese but you have to understand what your Chinese partners really mean when they talk. I usually tell my American clients to find a good interpreter not just a translator. I always tell them to listen to what they don't hear."

Pronk's consulting firm is named 1421 after a history-changing year in Ming Dynasty of China, when Admiral Zheng He discovered Australia, New Zealand, the Americas, Antarctica, and the Northeast Passage - it's considered the year that the Chinese discovered the world.

"It is good to put your Western culture behind and now let's rediscover the real China," Pronk said.