Four teenagers, including two juveniles, were charged Tuesday with murder in connection with beating a USC Chinese graduate student to death with a baseball bat as he walked near campus.

Jonathan DelCarmen, 19, Andrew Garcia, 18, Alberto Ochoa, 17, and Alejandra Guerrero, 16, each face one count of murder in the death of Xinran Ji, the Los Angeles County district attorney's office said. The four also face a special allegation that the death occurred during an attempted robbery.

Garcia, Ochoa and Guerrero are accused of beating 24-year-old Ji with the bat and striking him in the head. Prosecutors have not yet decided whether they will seek the death penalty for Garcia and DelCarmen. Ochoa and Guerrero are not eligible for the death penalty because they are under 18, prosecutors said. If convicted, they could face life in prison without parole.

Police said that there were no indications the suspects were gang members or that the attack on Ji was racially motivated.

Ji was attacked as he walked home from a study group about 12:45 am on July 24. Despite the head injury, he staggered back to his apartment a few blocks away, where a roommate later discovered his body. A trail of blood marked the path Ji walked.

Garcia, Ochoa and Guerrero were also charged with second-degree robbery, attempted robbery and assault with a deadly weapon for an alleged attack on a man and a woman at Dockweiler Beach later that day, according to the authority.

Police believe a 14-year-old girl who was detained in connection with the Dockweiler Beach robbery also was involved in Ji's assault "in some manner".

Ji's killing marked the second deadly attack on USC graduate students from China around campus since two students were shot dead in April 2012. 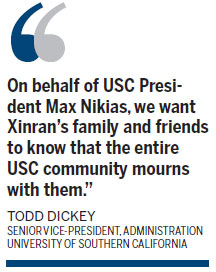 Campus security cameras and a license plate reader helped identify the suspects, police said. USC Public Safety Chief John Thomas said the suspects were apparently not aware of the network of technology, including 150 cameras, on and around campus.

Todd Dickey, senior vice-president for administration who oversees USC's public safety department, said USC will improve off-campus security in the neighborhood around the university. "Nothing is off the table. Our students are our highest priority," Dickey said.

"All of us at USC will continue to do our best to provide a secure environment for our campus and the area around it, hoping to avoid such senseless tragedies. The university and the LAPD together have significantly improved security on campus and in the surrounding neighborhoods. We recognize however that statistics provide little consolation when we lose one of our own." Dickey said.

He also acknowledged the pain being experienced by Ji's family and friends.

"On behalf of USC President Max Nikias, we want Xinran's family and friends to know that the entire USC community mourns with them. No arrest or conviction in this case can ever achieve true justice, because that could only come about by the return of Xinran to his loved ones," he said.

International students at USC have expressed safety concerns about the off-campus area near the college. A memorial will be held when Ji's family arrives in Los Angeles from China.