Oil shares rallied amid a dip in the benchmark on Wednesday after Beijing announced that a retired party leader with close ties to the industry was under investigation.

The oil sector gained an average of 4.95 percent, the highest of all sectors. The benchmark Shanghai Composite Index lost 0.09 percent to 2181.24 points, breaking a six-day winning streak.

The Communist Party of China Central Committee announced on Tuesday night that former security chief Zhou Yongkang is being investigated on suspicion of "serious disciplinary violations".

Zhou was a member of the Standing Committee of the Political Bureau of the CPC Central Committee, China's top decision-making body. He worked for 31 years in China's oil industry, for a decade at State-owned China National Petroleum Corp, the parent of listed unit PetroChina. Zhou reportedly has acolytes throughout China's oil industry.

The investigation gave "a massive boost to market sentiment", said Bank of America Merrill Lynch in a report on Wednesday. It means that the government can focus on economic affairs and possibly speed up much-needed reforms, the report added.

The announcement lowered uncertainties in Beijing's anti-graft campaign and will support a sustained rise in the A-share market, Guotai Junan Securities said in a note.

"Low evaluation blue chips and the financial sector will take the place of the steel sector to drive market growth," said the Shanghai-based brokerage.

The CSI 300 index of blue chips in both Shanghai and Shenzhen lost 0.4 percent to 2322.01 points. The Shenzhen Component Index dropped 0.18 percent, breaking an eight-day consecutive gain.

All 21 stocks trading in the oil sector ended Wednesday with a gain. Sinopec, the biggest oil refiner in Asia, was up 1.16 percent. 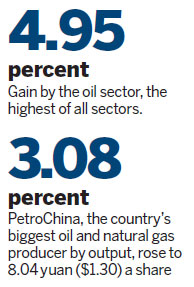 Beijing has investigated at least six current and former CNPC executives since August, including the former chairman of CNPC and PetroChina, Jiang Jiemin, who is widely known as one of Zhou's closest allies.

An investigation of Zhou could mean that the biggest purge of officials at CNPC is over. In Hong Kong, PetroChina's shares were unchanged at HK$10.44 a share.

PetroChina trades at 9.9 times projected 12-month earnings, compared with the three-year average of 11 times, according to data compiled by Bloomberg. In the long term, Chen added, PetroChina will benefit from shale gas development in the domestic market.

Haitong Securities rates PetroChina shares a "buy" with a target price at 8.88 yuan a share, a 10.45 percent markup from Wednesday's close. It expects the company to pay a dividend of 0.74 yuan a share this year and 0.8 yuan in 2015.

The Shanghai index surged by 6.5 percent in July, the biggest monthly advance since December 2012, triggering talks that Chinese equities have entered into a bull market. Year-to-date, the index has gained 3.1 percent.