China has no intention to taunt Japan by showing off its military mighty, even when Japanese politicians' words and actions intensify tensions in the East Asia.

It's true that the parade will be special and rare as it will not be held on the anniversary of the founding of the People's Republic. In the past two decades, two military parades were held in 1999 and 2009 to celebrate the 50th and 60 anniversaries of founding of New China.

However, the parade will only be part of activities that remind the world of what happened in the Eastern battlefield in World War II. As a responsible power that played an extremely important role in the Asian battlefield to fight against Fascist Japan, China's sacrifice and contributions have long been underreported compared with its counterparts who fight against Germany and Italy in Europe.

There were about 30 million casualties in China in the eight-year long war (1937-1945). And in the most brutal Nanjing Massacre in 1937 alone, 300,000 innocent Chinese lost their lives. Chinese people, through resistance, depleted Japan's resources and limited its ability to launch attacks on other countries, which is key to the victory of the World Anti-Fascist War.

China has every reason to use the international practice to highlight its pains and contributions in the World War II. On Jan 27, Poland held a ceremony marking 70 years since the liberation of Auschwitz death camp. In May Russia will hold a similar ceremony. 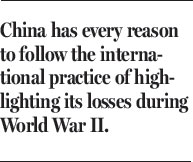 The series of activities are not aimed at planting hatred among the peace-loving people against their past foes, but remind the whole world to be vigilant to any factors that may threaten world peace.

Japanese people, who were exploited by its national military machine, paid the biggest price for Japanese warmongers. For instance, when the allies dealt a final blow to force Japan to surrender, more than 150,000 Japanese people were immediately killed after the US dropped atomic bombs in Hiroshima and Nagasaki.

As Japanese politicians continuously tried to whitewash Japan's war crimes in past years, the whole world should keep a close eye on Japanese Prime Minister Shinzo Abe's statement on Aug 15, the day when Japan announced surrender in World War II 70 years ago.

Abe has hinted that his statement may deviate from former Japanese chief cabinet secretary Yohei Kono's apology over "comfort woman" and the epoch-making statement made by former Japanese prime minister Tomiichi Murayama admiting Japan's war atrocities in World War II. If he does so, Abe will not only challenge the post-World War II international regime, but also cast a shadow on the whole of East Asia and harm the interests of Japanese people.

China is a peace-loving country that takes defensive defense strategy. The military parade, if it is held, will only display Chinese military's resolution to protect the nation and its people. Therefore China's activities to mark the victory of World Anti-Fascist War should be cherished by all peace-loving people across the world.