The International Monetary Fund (IMF) on Thursday maintained its forecast of 6.8 percent for China's economic growth this year, and said the current stock market turmoil will have little impact on the country's economy.

In its World Economic Outlook Updated, the IMF forecast the Chinese economy to grow 6.3 percent in 2016 and 6 percent for 2017.

The IMF reduced its forecast for the world's economic growth to 3.3 percent in 2015 from 3.5 percent in its April forecast. It predicts that the US economy will grow 2.5 percent this year, down from 3.1 percent in the April forecast, though Olivier Blanchard, IMF economic counselor and director of research department, told a press briefing at the IMF headquarters in Washington that US fundamentals are still solid, and the US recovery is on track."

"In constructing forecasts for China, our assumption continues to be that the Chinese authorities will indeed allow a moderate slowdown of growth, while also using monetary and fiscal policies if needed to prevent too sharp a slowdown," Blanchard said.

He said the current stock market plunge in China will have little effect on the world's second-largest economy.

The Chinese stock market, which increased 150 percent in less than a year, is not justified by dividends or fundamentals, according to Blanchard. "The bubble has burst. And that's potentially worrisome," he said.

"How worrisome is it? We don't think very much," he said, explaining that the capitalization of the Chinese stock market in the GDP is much smaller than in countries such as the United States, therefore less effect on the overall economy.

"My sense is that Chinese people should be used to the wild gyration of the stock market. This is not the first one. It may not be the last one. So I think it's very much a sideshow," he said.

But he noted that there might be small effect on consumption. "We don't see it as a major macroeconomic issue," said Blanchard, who is retiring from IMF in September after serving as its chief economist since 2008.

Blanchard said what he has seen in China is a rather healthy adjustment, where the predicted slowdown of growth is happening largely due to the decrease in real estate investment. He described the adjustment as desirable because there was too much construction. 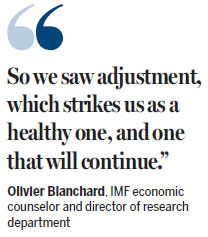 He also cited signs of adjustments for smooth lending, the decline of the credit growth rate to a reasonable level. "So we saw adjustment, which strikes us as a healthy one, and one that will continue," said Blanchard, a French national who has taught at Harvard University and the Massachusetts Institute of Technology.

Blanchard described the housing boom which is turning into a housing slump in China as a much bigger challenge than the current stock market bubble burst.

But he said credit controls and the adjustment of construction have put the situation much more in control.

"So if you look at things beyond what's happening in the stock market, there is no particular reason to have lost confidence as a result of what happened there," he said.

Blanchard said the central government's intervention into the stock market is appropriate, but warned that "government should realize that they cannot definitely achieve some level of stock prices they want."

In the updated World Economic Outlook, the IMF said its forecast of 3.8 percent for the world economy in 2016 remains unchanged.

Blanchard described the announcement of a negative growth rate for the first quarter in the US as the main unexpected development. And it can account for more than half of the revision of 0.2 percent to the world economy forecast for 2015.