A cluster of suicides by high school students in the San Francisco Bay Area has prompted a group of Chinese-American students to find out the cause behind such tragedies.

In March, a 15-year-old sophomore at Palo Alto High School was fatally struck by a train in an apparent suicide, following two other student suicides earlier this school year at neighboring Gunn High School.

In 2009, the Bay Area also witnessed a much-publicized spate of student suicides. Depression was believed to be the main cause.

Seven students, all of Chinese descent, started a survey project among their fellow students in February to "detect depression" and "find out some of the causes."

They launched the survey, a combination of online questionnaires and interviews, in May and have recently finished their preliminary report.

Around 1,600 respondents from more than 80 US high schools, mostly in the Bay Area, took the survey, which is composed of 25 questions covering personal information, personal health and pressure sources.

"We found that one in four high school students in the Bay Area are highly likely to have depression, double of what the highest reported rate is for high school students across the country," said Albert Zeng, a 17-year-old student at Mona Vista High School and also the lead author of the report.

"It's OK for kids to have depression, but no people want to talk about it. If we don't recognize it, then it's going to be a big problem," Zeng told China Daily. "Someone needs to start this; we need to start somewhere, and I think it needs to be now."

While the previous studies have attempted to research the causes of depression among high school students, few have considered what the students themselves find most stressful, according to Zeng.

Understanding the student perspective on stress from school-related and social factors may be important in recognizing and treating youth depression, he said.

"The questions were designed with the teenage perspective in mind in order to understand what students themselves consider as major stressors," he said.

For instance, in the category of "pressure source", the surveyors incorporated such factors as workload, grades, friends and parents' expectations.

Based on their preliminary analysis, they found that "the students who were not taught how to deal with stress were twice as likely to be depressed as those who were taught how to do so", and "the more time a student spent doing activities outside of school, the less likely he or she was to be depressed", according to the report.

Bryan Wu, a co-author of the report, said that homework load was an important factor in detecting student depression, and the workload is quite heavy in some of the Bay Area high schools known for academic excellence, including his Gunn High School.

"Some friends in higher grades said they felt like [they were] drowning in homework," he said.

To determine the link between homework and depression, the survey also looked at the correlation between depression and time spent doing things the students enjoy. 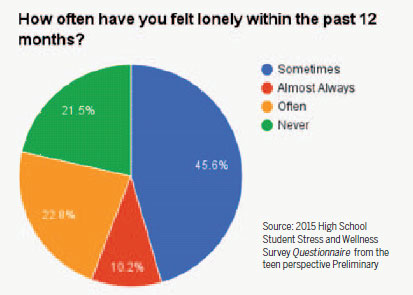