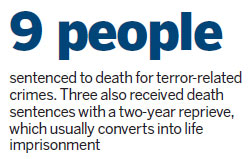 Nine people were sentenced to death on Thursday for terrorism, homicide and arson as the Xinjiang Uygur autonomous region intensifies its fight against terrorism.

Among the 81 people sentenced on terror-related charges, three also received death sentences with a two-year reprieve, which usually converts into life imprisonment.

Akbar Aklam, vice-president of the regional high people's court, said death penalties were given to organizers of terror crimes or those who colluded with overseas terrorist organizations.

"Terrorists must face the full force of the law," he added.

In one of the four cases disclosed by the court, four criminals convicted of launching terrorist attacks, killing several people and setting public property on fire were all sentenced to death.

China has launched a one-year nationwide campaign against terrorism with Xinjiang as the focus after a series of violent and deadly attacks by terrorists and religious extremists.

On May 22, terrorists set off explosives at a downtown marketplace in the regional capital Urumqi, killing 43 people and injuring 94.

On April 30, two terrorists launched bomb attacks at Urumqi South Railway Station, killing themselves and one passenger and injuring 79 people.

This year, police have detained more than 200 suspects in 23 groups and found more than 200 explosive devices in Hotan, Kashgar and Aksu prefectures in southern Xinjiang, where terrorism and religious extremism are prevalent.

Meng Nan, a Central Asia researcher at Xinjiang University, said the trials indicate the government had intensified its fight against terrorists.

Zhou Qiang, president of China's top court, said earlier this week that each court should accelerate trials involving terrorists and severely punish them.

Wu Ming'an, a criminal law professor at China University of Political Science and Law, said, "Our trials and arrests must be in accordance with judicial and legal principles."

In addition, he suggested that judicial work should be made more transparent.

"The public should be updated with court sentences and other information about terrorists. This is necessary to strengthen the anti-terrorism drive," he added.

Naval drill may calm choppy ties with the US