Taking on the 'hungry ghosts'

For older Asian Americans, the sense of being a burden in a family structure that expects younger generations to care for the elderly can make suicide seem like a practical solution, Chu said. The erosion of traditional Chinese family structures can also lead to a sense of having been disrespected or abandoned in a place far from home.

The less attached an individual feels to his community and his surroundings, the more likely he is to experience poor mental health and suicide ideation, according to a study conducted by David Takeuchi, a professor of sociology and social work at the University of Washington.

Isolation as the result of racial discrimination can also compound cultural conflicts faced by second-generation Asian Americans, Jeung said. In 2011, the suicides of Lance Corporal Harry Lew and Private Danny Chen after enduring army hazing related to their race underscored the impact racially motivated bullying can have on young adults.

Half of Asian American teens in the US have experienced bullying related to their ethnicity, according to a joint study released in 2011 by the US Justice and Education departments. Those statistics were corroborated by a study of 160 New York City public schools, released by the Asian American Legal Defense and Education Fund and Sikh Coalition earlier this year.

Growing up, performance artist Kristina Wong's mother told her that therapy was expensive and would prevent her from finding a good job when she was older, she told China Daily. She later created the one-woman show "Wong Flew Over the Cuckoo's Nest," inspired by her own struggle with depression and identity issues related to ethnicity. 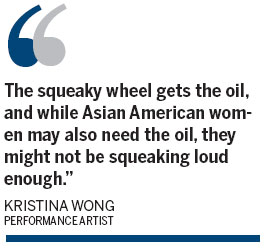 "The 'fictitious' images of being either the model minority or hyper-sexualized exotic beauties creates a very short ceiling for young Asian American women who are trying to define their lives," Wong said. "People look at our high education rates and our 'successes' and assume that it's done without grief and that no help is needed. I had so many people say as I was making the show, 'How can Asian American women be depressed? They seem fine to me.' The squeaky wheel gets the oil, and while Asian American women may also need the oil, they might not be squeaking loud enough."

Gender and racial discrimination combined with family conflict can especially affect US-born Asian American women like Wong, studies show. US-born Asian American women are more likely to commit or contemplate suicide than foreign-born Asian Americans, despite higher rates of utilizing medical and mental-health services, according to a study conducted in 2009 by Aileen Duldulao when she was a doctoral student in social work at the University of Washington. Mental health was also found to decline the longer an immigrant had lived in the US.

Duldulao attributes the "healthy immigrant" theory, which proposes that the selectivity of migration related to economic factors and the retention of healthier non-American cultural behaviors result in better mental health among recent immigrants. The theory has previously been applied to the Hispanic American community.

Noh believes that immigrants are also more likely to have built-in community support systems that are not always available to Westernized Asian Americans.

Media coverage of suicide among Asian Americans has frequently focused on Asian cultural characteristics that contribute to low rates of seeking help, but socialization factors including racial discrimination, a lack of culturally competent affordable mental-health service providers and the pressure of a Western-created "model minority myth" are equally significant, Noh said.

"It's a complex subject," she said. "We need to be looking at social structural factors. When we talk about African American issues, we don't discuss African value systems; we discuss socialization, and those pressures are just as present for Asian Americans. There are factors both inside and outside the community contributing in equal measure."

Asian conceptions of health tend to link bodily and mental health anyway and should be factored into services, said Russell Jeung, an Asian American studies professor at San Francisco State University. He noted that Asian Americans struggling with mental health issues are more likely to articulate feelings of depression through the expression of physical symptoms like exhaustion or headaches.

Cornell University developed an anonymous counseling program called "Let's Talk," specifically aimed at Asian American students. The informal talks are scheduled at neutral locations across campus on a drop-in basis, and aren't recorded in official medical records. According to the university, half of all students who use the program are international students, despite being only 30 percent of the student body.

Other culturally sensitive methods of mental-health treatment for Asian Americans might include the inclusion of an older family mediator, a focus on problem-solving or the use of acted skits with younger patients to address issues indirectly, Jeung said.

Zeitler, who now runs a website devoted to suicide among Asian Americans, was 14 when her mother died. Her mother had been molested as a child, and struggled to adjust to emigration and an emotionally abusive step-mother. She suffered debilitating depression that kept her in bed most days. The family called her "lazy", and demanded she "get her ass out of bed", Zeitler said. Her aunt struggled with similar issues, and after Zeitler's mother died, she felt the additional guilt of not having saved her sister. Even now, most of the family refuses to discuss either the suicides or the events that precipitated them, she said.

She points to the Chinese concept of "hungry ghosts", or unresolved issues and spirits who when invoked, will return to haunt those left behind. For many Chinese, suicide victims present a specter of fear.

"To me, it's more than clear that 'hungry ghosts' multiply when we don't talk about them," she said. "If we have the words to figure out what's going on, it's our duty to use them."

Yellen will focus on domestic economy