Taking on the 'hungry ghosts'


Asian American women commit suicide at startlingly high rates, and while the causes cover a myriad of issues, the most difficult part may be the silences that surround it, reports Kelly Chung Dawson in New York.

When social worker Leslie Zeitler stood up to speak at her aunt's funeral several years ago, she addressed what more than a dozen other speakers had neglected to mention.

"There's something that hasn't been talked about, but I think is important for everyone here to know," she said to a packed room, filled mostly with Asian Americans linked to the Chinese half of her family. "My auntie died by suicide, and she's not the only one in this family to die by suicide. My mother - her younger sister - also died by suicide. We have a problem we need to talk about."

The room emptied of both air and sound as 200 guests seemed to hold their breath, Zeitler recalled later. Afterward, no one mentioned her speech.

"I thought, this is the second time someone in the family has committed suicide and you all still aren't going to talk about it?" she said. "Suicide is difficult to discuss in any culture, but within the Asian American community it can be particularly difficult to challenge that silence."

Chinese culture has long romanticized the idea of chi ku, the act of eating and enduring your bitterness. For Asian American women grappling with mental-health issues, a combination of factors including pressure to succeed, an aversion to burdening others and the perceived stigma of seeking help in what some have called "a culture of silence" has contributed to startlingly high suicide rates.

Asian American women between the ages of 20 and 69 ranked second-highest among suicides across all ethnicities between 1981 and 2010, according to the Centers for Disease Control and Prevention. Most shockingly, Asian American women older than 65 and girls between the ages of 5 and 9 have the highest suicide rate of any ethnicity in the US, according to the CDC. For elderly women, the suicide rate was 6.5 per 100,000, compared to 4.3 among white women of the same age group.

Between 1996 and 2004, 11 of 20 suicides at Cornell University in Ithaca, New York, involved students of Asian ethnicity, a disproportionately high statistic for a student body that was 14 percent Asian American at the time.

"While ethnicity isn't directly linked to mental health, culture matters," said Joyce Chu, an associate professor at Palo Alto University in California who has studied suicide in the Asian American community. "There are important cultural considerations that put Asian Americans with mental-health problems at a higher risk for being underserviced."

Asian Americans don't necessarily suffer from depression at a higher rate than other ethnicities, but they are much less likely to seek help until their emotional circumstances have become unbearable, said Amy Lam, health-equity program director for Community Health for Asian Americans in Oakland, California. 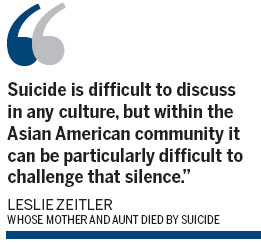 Less than 9 percent of Asian Americans use mental-health services, compared to 18 percent of the general population, according to a 2007 study led by Loyola Marymount University. When they do enter therapy, they are more likely than other ethnic groups to show heightened levels of psychological distress upon beginning treatment, and on average stay in treatment for shorter periods of time, according to the Asian American Psychological Association.

"Asian Americans are more likely to pretend that everything is okay or assume that things are manageable, and when you're talking about mental health, the wound and associated trauma essentially fester like gangrene," Chu said. "That can eventually mean suicide, because you're so far down the road that you don't believe there's a way back."

Diana Chien was 19 when she jumped off the roof of her boyfriend's 24-story Manhattan building in 2004. Her fall, which followed an argument with her boyfriend, was captured on camera and printed on the front page of the New York Post. By all accounts a star student and athlete, Diana's death caught her family completely off guard. Her mother, Hung Wei, dealt with her grief by founding a school publication aimed at teens struggling with mental-health issues and their parents.

For her brother Dustin, who was only 13 when Diana committed suicide, the following years were marked by depression, thoughts of suicide and unresolved guilt related to her death.

He successfully hid his depression for several years by maintaining good grades and staying out of trouble, Wei told China Daily. But when he was caught with marijuana in his junior year of high school, she persuaded him to see a counselor, who diagnosed him as being depressed.

Dustin now works with disadvantaged children and teenagers through a non-profit organization that aids Chinese immigrants in New York City.

"With many of the kids I'm working with, their parents are pressuring them about college because there's a fear they'll end up in the restaurant industry, but what they don't realize is that when you're dealing with depression you're not even sure you'll have a future," Chien said. "And for the most part, if you're sending them to Caucasian therapists, you're not going to get anywhere."

Blogger Jen Wang, who writes for the Asian American issues-focused website Disgrasian and has struggled with thoughts of suicide, spoke with National Public Radio about her experience with Western therapists unfamiliar with stricter Asian parenting styles.

"It's like Mommie Dearest," she said. "But you kind of have to fill in the gaps and say Ok well, this is where my parents came from. They grew up with war. They lost their homelands, and you know, kind of fill it in for them so it doesn't just seem like your parents are evil and controlling and demanding. You go in with mommy issues, and you end up defending your mom, you know? Or it's like you go in with depression, and then you end up feeling like you're Amy Tan and you're a storyteller, and your therapist is so enraptured."

Wang resisted therapy for a long time, she said. She grew up without the linguistic framework for talking about depression, in an environment in which weakness was seen as a failure.

"When I was growing up, there wasn't even a word for depression," she said. "It was always, you know, you're not trying hard enough or just work harder in school and pick up a new hobby, you know, practice the piano."

Fear of exposure and the accompanying humiliation of a "loss of face" for loved ones is a recurring theme in discussions of why Asian Americans avoid seeking help, and is typical of collectivistic cultures, Lam said. Asian cultures tend to promote the good of the group over the individual, whose role is often determined by one's relationship to others in the hierarchy. In this context, "face" and the protection of the whole is a mechanism of maintaining harmony, she said.

Yellen will focus on domestic economy