Lang Lang a 'Messenger of Peace'

By Michael Barris at the United Nations (China Daily USA) 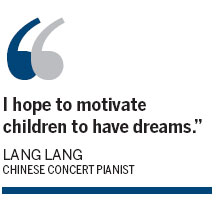 He has become an international star through his emotional interpretations of classical music. Now Chinese concert pianist Lang Lang is taking the world stage to help the United Nations promote global education.

UN Secretary-General Ban Ki-moon on Monday designated the acclaimed 31-year-old native of Shenyang, Liaoning province, as a "Messenger of Peace" with a special focus on education. In the role, Lang - the first person from China to receive the honor - will support the secretary-general's Global Education First Initiative. The campaign will use the "transformative power of education to build a better future for all" through raising education's political profile and quality, and generating funding through "sustained advocacy efforts," according to the UN website.

"Education is the key to development," Lang said at a ceremony at UN headquarters in Manhattan. "Our youth are the leaders of tomorrow. We must give them the necessary tools to reach their goals in life and make their dreams come true."

By putting every child in school, improving the quality of education and fostering global citizenship, the UN has said it can more effectively attack child mortality, poverty, and environmental degradation - problems prioritized by its member nations in 2000.

When he was asked by China Daily whether he saw the appointment as an opportunity not only to do humanitarian work but to raise China's global profile, Lang said, "China has become a very important global player. The next generation of Chinese will be much more open toward different parts of the world. The UN gives me the perfect platform to start looking at that."

The pianist, who has been playing since age 3, termed it "a great honor" to be the first Messenger of Peace from China. "It's given me tremendous pleasure to stand up here today," Lang said. "I hope I can take the challenge and find a more meaningful place to work with people and to work with myself as well."

Following the ceremony, the pianist gave a stirring performance of Chopin's Waltz No 1 in E flat major. He granted an audience member's request for more by performing what he said was a "new piece," a Chinese composition entitled Seaweed.

Lang is no stranger to the UN or humanitarian causes. He spent the past decade as the goodwill ambassador for the United Nations International Children's Fund, or UNICEF. He frequently has used his music to raise funds for UNICEF, including playing a sold-out Carnegie Hall recital in support of the organization's effort to help victims of the 2010 Haiti earthquake.

In 2008, his Lang Lang International Music Foundation took shape, to "inspire and motivate the next generation of classical music lovers and performers and to encourage music performance at all levels as means of social development for youth, building self-confidence and a drive for excellence", according to a UN release.

"Children and music are my passion," Lang told the ceremony in the Dag Hammarskjold Library Auditorium. "I hope to motivate children to have dreams. The pianist said he plans to visit the world's communities and organizations to emphasize "the importance of improving children's lives through education".

Lang thus joins actors George Clooney and Michael Douglas, Nobel Laureate Elie Wiesel, cellist Yo-Yo Ma and seven others asked over the years to advocate on behalf of the UN as a Messenger of Peace. (Although Lang is the first person from China to receive the honor, he is not the first person of Chinese descent to do so. Ma, the 2006 Messenger of Peace, was born in Paris to Chinese parents and educated in the US.)

Secretary-General Ban called Lang "a true global citizen", saying the pianist "collects people not only through his music but through his passion to build a better world through education."

Instigated in 1998, the title of Messenger of Peace is bestowed on "distinguished individuals, carefully selected from the fields of art, music, literature and sports, who have agreed to help focus worldwide attention on the work of the United Nations."

The messengers initially are chosen for three years, although three of the current 12 messengers - Douglas (1998), Wiesel (1998) and primatologist Jane Goodall (2002) - have served for more than 10 years.