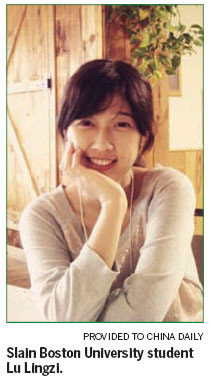 When Boston University student Lu Lingzi's life was taken after the Boston Marathon bombings this past spring, an outpouring of condolences from friends, family and strangers worldwide inspired a memorial scholarship fund in her name.

Just days after the attack on April 15, in which more than 260 people were injured and two other people were killed, Boston University (BU) trustee Kenneth Feld was moved to make a $100,000 commitment for a scholarship fund dedicated to Lu.

"It was an emotional response on [Feld's] part," Scott Nichols, senior vice-president for BU development and alumni relations, told China Daily. "When he took it to a [Campaign for BU] executive committee meeting, that's when with lightning speed it was, 'Me, too!' and 'Count me in,' and 'I'll do that as well,' and within literally half a minute we had $560,000 worth of commitments just within our board."

Six months after spreading the news and putting up a notice on the BU website that the Lu Lingzi Memorial Scholarship Fund had been established, the fund has received 1,300 individual contributions from donors worldwide and has reached its $1 million goal

It was the fastest fundraising he had ever seen, Nichols told the campus newspaper.

One notable donor story includes a Scottish member of the Royal Army, who ran a half marathon in Afghanistan to raise money for the scholarship while dressed in a Batman suit in temperatures of around 100 degrees.

"It's an unbelievably moving and reassuring gesture that people have made," Nichols told China Daily. "It's absolutely uplifting to see how people can care so deeply about someone they never knew, and help make a statement that we're going to do something positive with this horrific negative."

Lu was a dedicated student and an aspiring financial analyst, and was awarded a posthumous degree at the 2013 commencement.

"The way we keep thinking about this is it was incredibly moving, traumatically moving, to so many people, to lose such a bright, gifted person, and in such a senseless act perpetrated here," Nichols said. "The place is very connected, and I think the smallness of Boston really came out [after this tragedy]."

The scholarship will honor those who, like Lu, dreamed of studying in the US, Willis Wang, vice- president and associate provost for global programs, told BU Today.

The fund will endow two graduate scholarships and will be awarded to one graduate student annually beginning next fall and provide an annual stipend and full tuition for up to two years, according to BU's provost office.

International students enrolled in a full-time master's degree program will be eligible, with preference given to those from China, according to BU Today.

The dean of each school or college may nominate one student for consideration each year and nominations will be submitted to the associate provost for graduate affairs by March 1 of each year. Selection will be based on the student's academic achievements and potential for success.

In March 2014, Nichols said BU alumni will host a large gathering in Beijing, which he hopes the Lu family will join, and during which BU intends to honor her memory.

For the New York Marathon coming up this Sunday, yellow and blue ribbons will be distributed to honor the Boston victims, according to an Associated Press story.

The marathon's security budget has also been doubled this year to about $1 million to include more barricades, bag screenings, and bomb-sniffing dogs, according to AP.