Chinese youths get their chance at stardom and recording deals

For many young Chinese and Chinese Americans living in New York who dream of breaking into the entertainment industry in the Chinese mainland or Hong Kong, Eric Yuen's plethora of annual youth competitions is the place for hopefuls.

Yuen is the founder and producer of the long-running Miss New York Chinese Beauty Pageant, which has drawn hundreds of hopefuls over the last dozen years, but in the last year Yuen switched to creating a new competition: the Supernova Chinese American Singing Contest.

The contest began in 2013 and began its second run this year. Registrations began in January and wrapped up by the end of March. Auditions were held in Los Angeles, San Francisco, Boston and New York. Then 20 contestants were chosen who will be receive vocal and dance training, and they will compete in various events before participating in a final round to determine the winners in mid-May.

"I've been doing music-related production for as long as I can remember," Yuen said.

The Hong Kong-raised Yuen established Cypress Advertising Inc in 1984 and three years later started a production division, where he worked with Hong Kong artists who went on to become some of the biggest acts in mainland China and Hong Kong, like rock group Beyond and soloist Jacky Cheung. 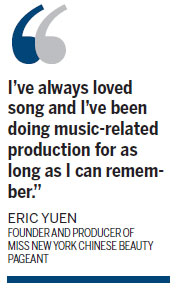 "Back then there was no internet, so we would we would rely on promoting artists at nightclubs. Every time these artists released new music, we would make the artists go to the clubs and have them sing and greet their fans," the 51-year-old said. "We would sell tickets in trendier neighborhoods like Tsim Sha Tsui that had the bigger nightclubs and book those venues to hold events."

Yuen produced events on a weekly basis - there was guaranteed to be a show on the weekends - and even after immigrating to the US in 1989, he continued in the same line of work. Yuen's brother continued production duties in Hong Kong and Yuen dabbled in all things related to the media, from producing a weekly magazine to coming up with Yellow Pages for the Chinese in New York, to producing pageant shows.

"I did everything, and it was really through all those ventures that I've gotten to know the Chinese community in New York," he said. "That's something that continues to help me today."

After working on the Miss New York Chinese Beauty Pageant for more than a decade, Yuen said he decided to focus his energy on a new project.

"The pageant is a really time-consuming project all-year-round," he said. "When I worked on the Chinese Yellow Pages, that would entail a couple of months of concentrated work while we gathered information for all the listings, but the beauty pageant is a year-round project."

With the beauty pageant off his to-do list - but where he still acts as a consultant - Yuen is focusing on the 2013 Supernova singing show, which took half a year of preparation and employs a staff of 150.

"A lot goes into the competition. I hire trainers for vocal and dance lessons and I rent out recording studios so that the contestants can get the most out of the experience," he said. "For a registration fee of $35, they can get access to all that learning. Where else can they get that?"

Through Yuen's competitions, Chinese and Chinese American have been able to leapfrog into celebrity careers in the mainland and Hong Kong, and that's what Yuen is hoping to replicate with Supernova. China-born Michelle Ye won the Miss New York Chinese Beauty Pageant competition in 1998 and has since catapulted to a successful career as an actress in China.

The winners of the Supernova contest will have the chance to record and release music in Hong Kong, Yuen said, and be featured guests at other Hong Kong singers' concerts, as past winners have been given the chance to.

"My mission with creating all of these contests is to give these kids an opportunity. It doesn't matter where the opportunity lies, it's just giving them this experience and education that they wouldn't have elsewhere," Yuen said.

Alibaba IPO could be the biggest ever

Chinese youths get their chance at stardom and recording deals

US imposes sanctions on Russia