China's foreign direct investment (FDI) in the United States jumped 144 percent in the first five months of this year to $2.03 billion, according to the Ministry of Commerce.

The strong growth came amid a 10.2 percent decline of China's overall FDI in 146 countries and regions in the world in the five months, ministry spokesman Shen Danyang told a briefing in Beijing on Tuesday. The total of $30.8 billion in FDI was made by 2,766 Chinese companies.

In the first three months, Chinese firms spent $1.36 billion on 26 FDI transactions in the US. The number of acquisitions reached an all-time quarterly high, the report said. Healthcare, real estate and information technology are the sectors that attracted the most investment.

Karl Sauvant, a resident senior fellow at Columbia Center on Sustainable Investment, said he would not place much faith in data covering five months. "One relative big project, be it Greenfield or M&A, can make all the difference, especially since the basic FDI inflow data are still very low.

"However, this performance shows that the US market remains very attractive for Chinese investors, and I would expect Chinese FDI in the US to grow further," said Sauvant, editor of the book Is the US ready for FDI from China?

China still lags far behind the top 10 FDI sources in the US, which include Britain, Switzerland, Luxembourg, Japan, the Netherlands, Canada, Germany, France, Belgium and Australia. The 10 nations accounted for 84 percent of FDI in the US. 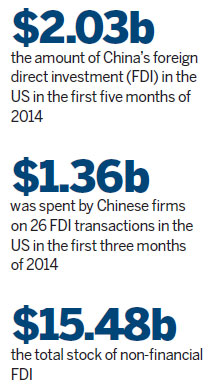 But Chinese companies have been playing catch-up. They recorded a record high of $14 billion in total deals in the US in 2013, double the amount of the previous year, according to an earlier Rhodium report.

The figure was higher than the one from the Ministry of Commerce, which put the Chinese FDI in the US in 2013 at $4.23 billion, an increase of 15.9 percent over 2012. The ministry put the total stock of non-financial FDI at $15.48 billion.

The news of strong Chinese FDI growth in the US in the first five months came just a day after the Chinese embassy in Washington upgraded its website "Guide to Investing in the United States."

The website, first started in 2012, now provides the latest information regarding the investment climate, procedures, legal framework of investing in the US as well as tips for Chinese investors.

The new website, launched by the embassy's economic and commercial counselor's office, took a year of preparation. It features the investment environment in each of the 50 US states.

Unlike Washington where Chinese FDI has often become political, local, city and state leaders in the US are often enthusiastic in attracting Chinese FDI to create jobs and boost their local economy.

"It's all about jobs," said Virginia Governor Terry McAuliffe, a week ago after meeting a delegation of some 100 Chinese entrepreneurs from small and medium firms coming to Virginia to seek investment and trade opportunities.

Many US states and cities, including Virginia, have opened trade and investment offices in China, mostly in Beijing and Shanghai. And their contact information is also listed on the new website.

Chinese Ambassador to the US Cui Tiankai said on the new website that Chinese FDI in the US is still in its beginning stage. Many Chinese companies lack understanding of the investment environment, laws and regulations and procedures. They hope both the Chinese and US government departments will provide more information.

"I hope this website can become a window for Chinese companies coming to invest in the US and make a contribution to China-US economic cooperation," Cui said.

China and the US agreed to enter substantive dialogue on a Bilateral Investment Treaty (BIT), a highlight of the fifth session of China-US Strategic and Economic Dialogue (S&ED) held in Washington last July. The sixth session of S&ED will be held in Beijing early next month.

While the US hopes the BIT will further open Chinese markets, especially in the service sector, China wants Chinese investment to have equal access and treatment in the US.

The once one-way FDI flow from US to China has been turned into a two-way street, as more Chinese companies are encouraged to explore new markets and technology. In fact, Chinese FDI in the US has exceeded US FDI in China in recent years.

Chinese FDI still encounters barriers in the US, especially from the Committee on Foreign Investment in the United States (CFIUS), an inter-governmental agency that reviews FDI for national security concerns. There has been an increasing call for CFIUS to make its process more transparent.

In September 2012, US President Barack Obama signed an order for Ralls Corp, invested in by executives of China's Sanyi Corp, to divest its wind farms acquired in Oregon that are close to a naval weapons systems training facility. It was the first such order since 1990 and, as a result, Ralls executives sued Obama.

In a report in October 2012, the US House Intelligence Committee warned of the national security risks posed by two Chinese telecom equipment giants, Huawei Technologies and ZTE.

The fear-mongering of Chinese FDI has triggered strong protest from both the Chinese government and investment community.