When John Wang started the Asian American Business Development Center in 1994 in New York, Asian businesses in the city tended to operate within their own communities and had problems integrating into the mainstream marketplace.

Asian businesses then were predominantly cash-based, and business owners relied on borrowing from friends and families. Whether it was due to language barriers or a lack of understanding of American business culture, Asian businesses had a hard time tapping into the resources that were available to small business owners, which is where Taiwan-born Wang stepped in.

"Asian businesses tend to be inward looking, and they're not sure how to deal with the government. They have some suspicions of the government," said Wang, founder and now president of the Asian American Business Development center (AABDC). "Many of them tend to be cash-based, so they don't want the government to look into their finances and things like that. Those were the issues in the early days." 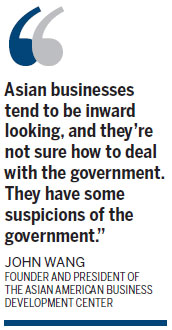 AABDC worked with the local and federal governments to help Asian business owners find resources and programs that are meant to help small business owners, and tried to educate the Asian-American community on how to effectively run small businesses. The organization also partnered with other ethnic communities such as the African American and Latino business communities to nurture opportunities across the groups, Wang said.

"So that's why we tried to set up this organization, by working with federal, state, city governments and the resources they have in providing businesses. At that time, many of the public-private sectors were also interested in reaching out to the growing Asian-American community, so we were in a way a conduit to helping them to reach the Asian American community," the 66-year-old told China Daily.

Today, Asian-American businesses are part of almost every sector in the US economy, Wang said, a contrast to when AABDC was first established two decades ago.

In a survey conducted in 2007 on small businesses across US, the first ever of its kind, the Census Bureau found that the number of Asian-owned businesses increased at more than twice the national rate between 2002 and 2007. The businesses generated more than $500 billion, a 55.4 percent increase from 2002.

Now that Asians and Asian Americans are better integrated into the mainstream, the next step is to push for more executive-level Asians in big corporations, Wang said.

"The percentage of Asian Americans in decision-making and senior-making level positions on the boards of corporations is very small, and certainly a lot smaller than the population of Asian Americans," said Wang. "Our next phase is really focusing on how to develop the leadership of Asian Americans, because I think 20 years ago, you're moving people into the mainstream, you're helping them to establish. Now, people are fairly well established. And then we wanted to move to assert Asian Americans to really form a group that can maybe speak for Asian Americans on issues, policies, and to have a more assertive role in what Asian Americans can play in terms of national economic life."