Wal-Mart Stores Inc, the world's largest retailer, will triple its spending on food safety in China to $48.2 million.

The company will perform additional testing and apply tougher standards for suppliers in 2014, increasing DNA testing on meat products by 100 percent and facility audits and inspections of primary producers by more than 30 percent from 2013, according to a statement issued by Wal-Mart.

Wal-Mart made the announcement in Beijing on Tuesday at the start of China's 2014 National Food Safety Week. Previously, the Bentonville, Arkansas, retailer had announced investments of about $16 million for the same three years - 2013, 2014 and 2015. 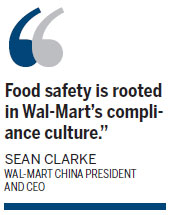 "This increased investment reflects our growing commitment to enhance food safety management in the supply chain and in all our stores," said Wal-Mart China Chief Compliance Office Paul Gallemore in the statement. "As a result, Wal-Mart hopes to provide even greater assurance of food product quality, authenticity and safety to our customers."

Wal-Mart China President and CEO Sean Clarke said in the statement, "Food safety is rooted in Wal-Mart's compliance culture. We strive for our customers to have complete trust in the products they buy from us. All our efforts are aimed to ensure the authenticity, safety and quality of food for our customers in China."

China has faced numerous food safety problems, including melamine-tainted milk and cadmium-tainted rice to recycled "gutter oil" used for cooking.In January, Wal-Mart's "Five Spice" donkey meat was found to contain fox meat, which came from a local supplier. After the discovery, the company said it would increase checks on vendors.

Wal-Mart has about 7,000 food suppliers in China. It cut 4 percent of its suppliers in recent years for failing audits or DNA tests.

The discount retailer plans to add 110 more stores in China by 2016 to the roughly 400 now operating.

More tie the knot with spouses from overseas

Situation in Iraq worsens, US, Iran step in

China's 'Uber' plans to be in NYC, San Francisco