"Expansion is not in the Chinese DNA, nor can we accept the logic that a strong country is bound to become hegemonic," he told an audience of about 350 in London, including international studies researchers.

On the final day of his three-day visit to Britain, Li used an event hosted by two of the UK's top think tanks, the Royal Institute of International Affairs and the International Institute for Strategic Studies, to drive home his vision of China's international role.

He stressed China's determination to prevent the regional situation from getting out of control, to uphold order and stability and bring the issue back on the track of consultation and negotiation.

However, he warned that China will "have to take resolute measures to stop acts that provoke incidents and damage peace". China has leveled accusations against Vietnam in a row over a Chinese oil rig drilling in the South China Sea.

Anti-Chinese riots flared in Vietnam in which four people were killed during a rampage of destruction and factory looting.

Li said China's ambition to become a "moderately developed country" by the middle of the century entails a long-term peaceful and stable external environment.

"China's development over the past three decades has been achieved in a peaceful and stable environment," he said. "We have benefited from this environment. Why should we give up this benefit and environment?"

Sir Paul Judge, sheriff of the City of London, said Li's speech was "very well thought through and constructed".

"He was clearly making peace overtures. As we know, there have been some incidents in the South China Sea over the past few months. He seems to be wanting to calm that down. It is something we very much support," Judge said. 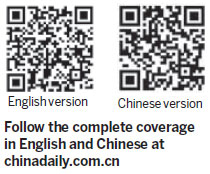 "I think it is important to hear that from China's perspective there is an important emphasis on harmonious and peaceful development," he said.

"I think that's something which will make people in the international community more confident that China understands the dangers and risks associated with its changing role in the world."

On China's economy, Li said that despite a series of so-called mini-stimulus measures that the Chinese government has introduced this year, the economy has yet to show any strong signs of recovery, with housing prices continuing to fall.

Prices of new homes fell in May in 35 of 70 cities tracked by the government, the National Bureau of Statistics reported on Wednesday. Speculation has arisen that the 7.5 percent economic growth target for this year will be missed.

But Li said the economy will move within a "reasonable range" - a concept meaning economic growth of around 7 percent and inflation of less than 3.5 percent - through "targeted regulation", instead of large stimulus packages.

"I can promise everyone honestly and solemnly there won't be a hard landing," he said.

The International Institute for Strategic Studies was founded in Britain in 1958 with a focus on nuclear deterrence and arms control.

The Royal Institute of International Affairs, also known as Chatham House, is an independent policy institute based in London. Founded in 1920, it carries out analysis on global, regional and country-specific challenges and opportunities.

Zhao Yinan in Beijing contributed to this story.