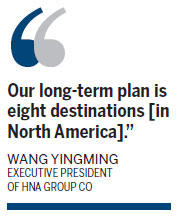 The airline will use Boeing's 787 Dreamliner for the new four-day service on Monday, Wednesday, Friday and Saturday, with the expected travel time between the two cities about 13 hours, according to Hainan Airlines.

Hainan Airlines launched its first route to the US -Beijing-Seattle - in 2008. The Haikou, Hainan province-based airliner also operates flights from Beijing to Toronto and Chicago.

The launch of Hainan's service to Boston's Logan International Airport on Friday also means that the city will no longer be the largest US airline passenger market without a nonstop trip to China. Boston, the largest city in New England, is the sister city of Hangzhou, Zhejiang province.

"Our long-term plan is eight destinations [in North America]," Wang said in an interview with China Daily. He also said Hainan is ordering more Boeing 787s to meet the "huge demand" in the North American market.

Hainan expects to serve close to 5,000 travelers a month on the new route, according to a filing with the US Transportation Department.

Massachusetts is home to more than 40 colleges and universities with thousands of Asian and Chinese students, especially in Boston.

The state also is one of the biggest markets for Chinese tourists, with close to 150,000 travelers visiting in 2012, according to the Massachusetts Office of Travel and Tourism.

Michael DiCarlo, executive vice-president of Attract China LLC, told Boston Business Journal in March that he predicts the number will exceed 250,000 this year because of the Hainan flights.

"By 2020, there will be more Chinese travelers to Boston than actual Bostonians living here," said DiCarlo, whose firm promotes US businesses, including nearly 70 in the Boston area, to Chinese travelers.

In a June 15 story in the Boston Globe, Chen Feng, chairman of the parent company of Hainan Airlines, said he founded the airline company in 1993 and even served drinks on the inaugural flight.

Chen, who taught himself English and earned a management diploma from the Harvard Business School in 2004, said: "We wanted to establish Hainan Airlines, to distinguish ourselves from everyone else as a fully service-oriented company, starting with myself. I pushed the cart serving the passengers to set a standard and set a difference."