Former Australian Prime Minister Kevin Rudd said Chinese President Xi Jinping is a leader the United States can work with if it chooses, and that despite many challenges, the US-China relationship can be managed peacefully.

"Xi is the most powerful Chinese leader since Deng Xiaoping and possibly since Mao," he told an audience at an Asia Society forum in New York on Wednesday night called US-China 21: The Future of US-China Relations under Xi Jinping.

Xi's core vision centers on his concept of the "China Dream", Rudd said, which has two objectives: to achieve a "moderately well-off China" by 2021 when the party celebrates its centenary; and "a rich and powerful" China by 2049 on the centennial of the founding of the People's Republic of China.

Even with China's economic growth slowing, Rudd expects the country to produce annual growth of 6 percent or slightly more for the next decade. "This will produce a global shift in economic and political power that will reach far beyond Beijing and Washington," he said, and offered this prime example: the recent move by many Western nations to join China-led Asian Infrastructure Investment Bank over US objections.

Rudd said he rejects the recent prediction made by David Shambaugh, a longtime China observer in the US, that China and the Communist Party will collapse. "It would be a mistake on the part of the US or other nations to form policy based on this," he said.

Despite a sharp rise in defense spending by Beijing, there is " no serious chance of China reaching military parity with the US by mid-century," said Rudd.

Rudd said that the Asia-Pacific region is the first area where the new US-China relationship is starting to emerge. It is a region in which China is now a significantly more important trading partner than the US for every country in Asia, including every American military ally and strategic partner, according to Rudd, who added that China is also becoming an increasingly important investment partner.

The shifting balance of economic power is also beginning to be seen globally where China's economic presence in Africa, Latin America and Europe also challenges the long-standing economic primacy of the US, noted Rudd. 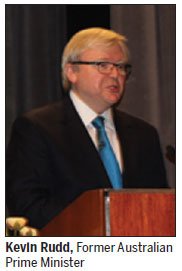